FERC held a “scoping” meeting at Stuarts Draft High School on March 19th, 2015.  This was an opportunity for members of our community to voice concerns and participate in the democratic process about the proposed Atlantic Coast Pipeline (ACP).  If it’s built it will bisect Augusta County, Virginia, the place where we live.

The news media reported what was said…not what happened. 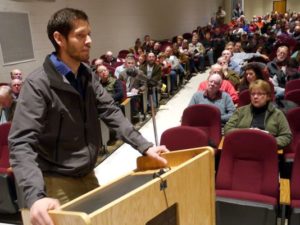 Area resident John Geary, who owns a farm that is on one of the current proposed routes for Dominion’s Atlantic Coast Pipeline, speaks about his concerns Thursday, March 19, 2015, at the FERC scoping meeting at Stuarts Draft High School.
(Photo: Randall K. Wolf/The News Leader)

We arrived at 4:40 pm for a 7 pm meeting. There was already a line formed for people to sign up that wished to speak.  We joined the back of the line.

The ACP is one of ten proposed high-pressure natural gas pipelines crossing the Appalachian Mountains moving fracked gas to the Atlantic Coast.  This pipeline will be a 42-inch pipeline – the largest Dominion has ever attempted.

Dominion, the largest energy company in Virginia “Pre-filed” with FERC to build the pipeline. This meeting is part of the “Scoping” process. We were in line to speak in opposition to the proposed route.

A steady flow of people filed in. A woman with a clipboard met selected people at the door. She did not greet us, so I wondered whom she was assisting. She would greet certain people, check something on her clipboard and then walk them to the line and insert them into the line in front of me.  “What is going on?” I thought.  It happened again and again, then I realized what was going on.  It brought back memories of middle school bullies.

Here’s how it works: put one of your bully friends in line as a “placeholder” so the person you really want in line doesn’t have to wait like everyone else. We refer to them, whose time is more important than ours, as “Chuck Bubbas”. In the couple hours we stood in line I watched four people inserted in front of me, and many behind me.

I asked “clipboard woman” what was going on and she informed me that these “guests” were not butting in line because she had “placeholders” saving them a spot.  Dominion was “stacking” the deck with people that would speak in favor of the pipeline. Not only did they bring in their hand-picked people, most from outside of our County, they also handed bottles of water to them. I learned later Dominion also hosted a “reception” room in the same building, which is a “public” high school.  It was exclusively for their pro-pipeline “guests” with food and drinks provided.  We were not allowed in nor welcomed. We tried.

It made me angry. And it made me think about Dominion’s domination over our politicians in state government. This year laws passed in their favor and bills were killed in committee that would have brought transparency to Eminent domain “takings”.

Chuck Bubba #4 was speaker number 16.  I was 17th.  Here’s my three minute speech.  When I left the auditorium after speaking, a woman came up to me and asked, “Are you Mr. Whitecarver?”  She left out the “s” in my name.  I replied, “Yes ma’am.”  She was wearing a pro-pipeline sticker and I did not know her.

She scolded, “Well, I guess all you people in Augusta County ought to move out!”

Perhaps there is nothing illegal about using “Chuck Bubbas” or having a reception room for only selected people in a public building, but it’s wrong.  Dominion’s actions prevented people whose land is threatened by the ACP and concerned citizens from expressing their opinions.   It distorts the facts and is disrespectful.  Plain and simple it’s dishonest and corrupt.

Good Reasons to Be Against the Pipeline

I’m against this pipeline for many good reasons.  This is the widest part of Karst geology in Virginia and the area with the most subsidence/sinkhole collapses, making this a very dangerous place for a large diameter, high-pressure natural gas pipeline.   Other reasons include protecting our water resources, the devaluation of our farms and forests and the beauty of the Shenandoah Valley.  I’ve got another reason now – how can we expect a corporation that is dishonest and corrupt at a meeting to ethically build a high-risk pipeline?

To find out more about why this is not the right place for this pipeline go to the Augusta County Alliance website. 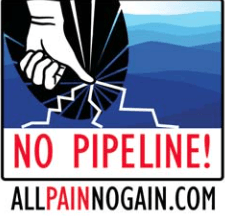 See our campaign here – All Pain No Gain.

“Never doubt that a small group of thoughtful, committed citizens can change the world; indeed, it’s the only thing that ever has.”