Harpers Ferry, John Brown and Sediment in the Shenandoah

Harpers Ferry, John Brown and Sediment in the Shenandoah

Panoramic view of Harpers Ferry taken from Maryland Heights by Mark Fickett. The Potomac River is on the right and the Shenandoah River is in the upper left.

Monday was Martin Luther King, Jr. Day and we were driving back from Wilmington, Delaware. Our route took us through Harper’s Ferry, West Virginia – one of the most spectacular places on Earth.  Thomas Jefferson said the view from a high rock in the village was “worth a voyage across the Atlantic”.  This is where the Potomac River and the Shenandoah River join forces and grind through the vent they’ve been making through the Blue Ridge Mountains for millennia.  The drainage area is huge, thousands of square miles from four states all coming together at Harper’s Ferry.  Imagine all the energy in that water.

I always like to stop here and walk across the Potomac River on the people bridge.  It’s a religious kind of thing for me – all that water and energy going through the gap in the mountains is an awesome sight.  Our farm, a hundred and fifty miles from here is part of the beginning of the Shenandoah.

Harper’s Ferry has a lot of history and natural wonder.  It ought to be a United Nation’s World Heritage Site.  Indeed this is where our infant American nation built one of its first armories to make weapons.  The energy from the water was used to turn lathes that would make barrels for muskets. It became a musket factory.  Meriwether Lewis acquired rifles and hardware for the Corps of Discovery here in 1803.

It was also here in 1859 that John Brown made his famous abolitionist raid to capture the federal arsenal and incite rebellion among slaves.  Ironically he was captured by Robert E. Lee, a colonel in the U. S. Army at the time.  Weeks later John Brown was hung.  His raid might have been a failure but what precipitated was our war to end slavery.  John Brown wrote in a letter prior to his hanging,

“I, John Brown, am now quite certain that the crimes of this guilty land will never be purged away but with blood”. 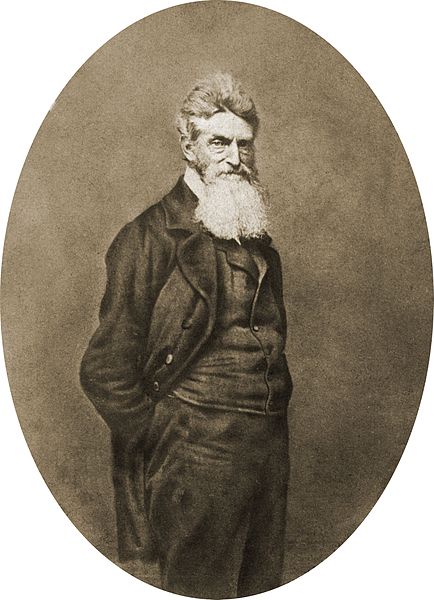 Portrait of John Brown in 1859, prior to his death from hanging.

We are here on Martin Luther King, Jr. day.  Our nation has certainly grown and matured since the days of slavery.  The flames of bigotry continue to diminish and maybe someday we will see those embers die.

Sediment-Laden Waters of the Shenandoah

I wish we could learn as much about soil and water stewardship as we have learned about human rights?  What does it take for people to care?  As our population continues to demand resources without paying for their true upkeep we will fall deeper into ecological debt.  We must change our logic of capitalism to ensure that we pay for the environmental services our resources provide.  At that point our rivers will run without sediment, our fisheries will recover and our soils will be more productive.