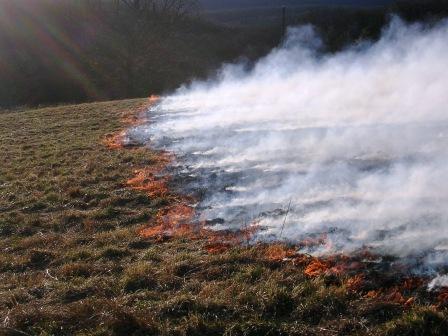 A “backfire” is a slow burn

This is a prescribed fire manager’s drean.  See the smoke moving off to the right?  The fire is actually burning to the left, into the wind and into the only fuel left to burn.  The flames are low because we prepared the site by mowing the fuel (native grasses/prairie) down.  This is called a “back fire”, burning slow and low.  March is an ideal time to burn native prairie.

This prescribed fire took place at Camp Shenandoah, the Boy Scout camp in Swoope, Virginia.  The native prairie was planted in 2005.  It was in dire need of disturbance because it had grown too thick for ideal quail habitat. Students from my class at James Madison University, volunteers from the Boy Scouts of America and the Virginia Department of Forestry assisted with the burn.

The Scouts planted the native prairie as part of an initiative to establish wildlife habitat for grassland birds especially the Northern Bobwhite.  In this part of the country we call this “early successional habitat” because it 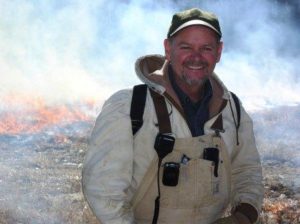 is dominated by native grasses, wildflowers and shrubs – not trees.  For technical and financial assistance the Scouts enrolled in the Wildlife Habitat Incentives Program (WHIP) administered by the Natural Resources Conservation Service.

Native prairie needs disturbance, such as fire, to invigorate its growth and to keep the habitat in ideal conditions for quail and other grassland birds.  The plan for this site calls for a burn and light discing.  Adjoining native prairie was not disturbed because quail will use last year’s growth (which is now dead) for nesting material this coming season.  We will burn specific areas on a rotational basis as needed to diversify the habitat.

*All prescribed fire should be conducted according to a certified prescribed fire plan.  In Virginia, certification is administered by the Virginia Department of Forestry.