Quail Survive at Cobble Hill Farm Because of Habitat

Home BirdingQuail Survive at Cobble Hill Farm Because of Habitat

Quail Survive at Cobble Hill Farm Because of Habitat

Cobble Hill Farm in Staunton Virginia released pen raised Northern Bobwhites in December of 2012.   I interviewed Jim Pile, the farm’s manager on October 1st 2013 for this article and I could hear Quail giving their “Hoy-ee” call.  Click on the hot link above to go a website with the call.

“We didn’t have Quail before but we do now”, Jim tells me.   “We saw one covey with young birds back in July and we can hear them throughout the farm”. 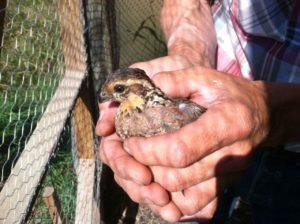 Now, there’s no way to tell if the ones that reproduced are from the one’s they released or from someone else’s released birds or from wild ones but one thing is certain: Quail reproduced at Cobble Hill Farm in 2013. 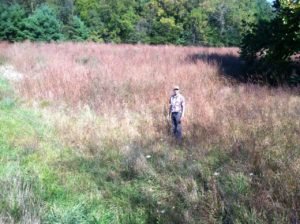 Native meadow where Jim Pile of Cobble Hill Farm released pen-raised Quail in December of 2012. Click on this image to see a 50 second video.

CLICK ON THE IMAGE TO THE RIGHT TO SEE A 50 SECOND VIDEO OF THE PEN-RAISED BIRDS.

I asked Jim what he thinks contributed to their success.

“It’s habitat and how we farm”, he said.

He elaborated,  “We have a diversity of habitats and we don’t mow our pastures.  This provides cover and food throughout the farm.  We also manage our deer population.  Too many deer can damage Quail habitat”.

They also have “wildlife food plots” with lots of annual grains and forbes that help Quail and other wildlife. 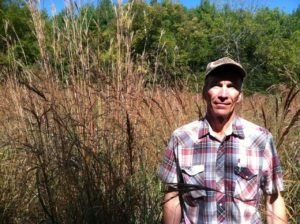 Last December Jim released about 35 mature pen-raised birds in their native meadow that is now about six years old.  As we walked through the meadow the Indian grass, Big Bluestem and Switchgrass were over our heads.  This is the habitat where they released the birds in the darkness of night.

*Don’t mow everything – manicured pastures and  lawns are wildlife deserts.

*Don’t ever give up.

If you would like some Quail or want to establish habitat send me an email, I will be glad to help you.  Call Jim Pile directly at 540-480-0917 to purchase some Northern Bobwhites.

Virginia and USDA have excellent Quail habitat establishment programs with funds to help.  I can get you in contact with the right people and right programs for you.