“Just because the problem seems unsolvable doesn’t give us the right to give up”.

I can’t remember who wrote that but it sticks in my mind.  And just like the people trying to find that one blight resistant American Chestnut tree, Bobwhite Quail lovers keep hoping that maybe someday one mating pair from pen-raised birds will survive and reproduce.  We haven’t found the resistant chestnut tree nor have we had success with re-establishing Quail using pen raised birds…but it doesn’t stop us from trying. 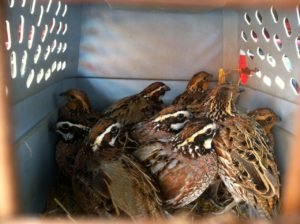 5:15am…34 degrees…The air is thick with moisture and the moon lights my way down the path to the river.  I carry a small cage with ten pen-raised Northern Bobwhites.  The Indian Grass, Big Bluestem and other native grasses arch over my head.  The mowed path crunches under my footsteps.  Now on the bank of the river I set the carrier down then scatter some mixed bird seed around.  The moon’s reflection is on the river.  With a silent reverence for nature and faith in the process of life, I open the door to the crate, “Good luck my friends.  May you have good health and prosper”, I tell them.  I turn and walk away, the soft wind ruffles the seed heads of the native grasses.  The riffles of the river fade.

The odds of survival for these birds is pretty close to zero but if just one pair survive the gauntlet of hawks, falcons, foxes, domestic cats and other predators through the winter, then just maybe they will reproduce.  Ours didn’t make it last year.

Thanks to our friends in Middlebrook and Swoope we released 66 birds last night on five separate farms with good quail habitat. 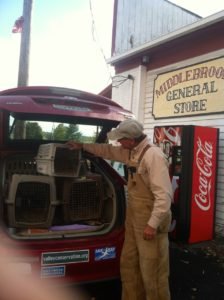 Delivering Quail from Cobble Hill Farm to the Middlebrook Store.

Quail populations began their plummet in our Valley back in the late 70’s.  Today the Northern Bobwhite is one of the Audubon Society’s “common birds” in decline, their population declining 80% since 1967.  Why?  We really don’t know.  There are lots of theories.  Many people and organizations are trying to find out like the National Bobwhite Conservation Initiative.  My opinion –  death by a thousand cuts.

I’m not blaming the natural predators; Quail have always rebounded from natural causes.  In my opinion the three biggest threats to Quail are the un-natural causes – tall fescue and cats, and lack of habitat.

Habitat restoration is the best hope for Bobwhites.  Click on this hot link for an excellent habitat appraisal guide. 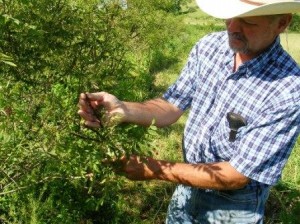 False Indigo Bush: One of the best shrubs for Quail.  This shrub provides both cover and food for Quail.

Here’s what you can do: 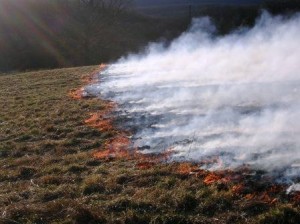 Here’s a picture of what a “prescribed burn” of native prairie should look like.  This is a controlled “back fire”.

Plant food plots or leave some grain in the field.

Cat eating a bird. Photo by Gaetan-Priour and courtesy of the American Bird Conservancy

Virginia , USDA , Virginia Working Landscapes , the Piedmont Environmental Council ,Valley Conservation Council and the Chesapeake Bay Foundation all have programs to help landowners establish habitat.  Contact your local Soil and Water Conservation District or your local USDA office for assistance.  You may also contact me, I will be glad help you.