A male Tree Swallow on guard near his nest.  The males arrive in early March here in Swoope.  Females arrived this year on May 16th.

May fills my senses as I walk our “river field”.  Life’s energy surges this time of year.   The avian migration is at its peak.  All the birds that want to be here have arrived except for the Dickcissels.  They will arrive when the peonies and day lilies open.

The cool nights and warm days have forced the orchardgrass and bluegrass in our pastures and hayfields to head out.  The hay should be in the barn you know.  The cows munch.  Their bodies are slick with spring.  The calves are muscular and quick with their mother’s milk smudged on their heads.

Orachardgrass seed heads emerging or “heading out”.  This is best stage to cut it for hay but often the worst time to cure it because of the weather.

My boots and jeans are wet from dew all the way up to my knees.

There is not a moment without bird song.  It used to torment me not knowing who was singing but now I know.  Robins, Cardinals, Warbling Vireos, Yellow Warblers, Bobolinks, Grasshopper Sparrows, Meadowlarks, Red Wing Blackbirds and Orioles all singing at one time.  The avian symphony plays constantly this time of year. 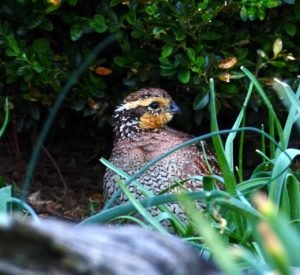 A female Northern Bob White. We released 20 in October 2013.  Click on this image to see a video of Cobble Hill Quail where we bought these pen raised birds.

I walk along the bottom of a steep wooded slope in search of the Quail we released last fall.  I heard them the other day singing their “Hoy-ee” song.   I see a male nervously walking under the thorny Hawthorn trees and over further two females.  They made it through the long, cold, wet winter.  Mate my friends.  Beat the odds and give us renewed hope.  It was ten years ago that I last saw a covey here in this very place.

Wild Cherry and Black Willow trees are in full bloom.  False Indigo Bush and River Birch are budding out.  I walk to the river’s edge where the cattle used to cross.  It is amazing how quickly Mother nature can heal eroding stream banks once the cattle are removed.  She planted a Sycamore tree right in the middle of the North side of the crossing.  It grew much faster than the ones we planted.  Its roots anchor the soil and its leaves provide food for insects that live in the water. 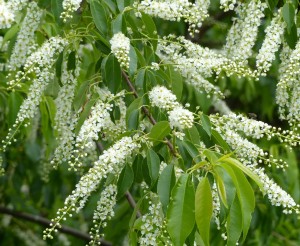 Wild Cherry in full bloom. This is one of the most valuable trees in the East for not only its wood but for wildlife as well. 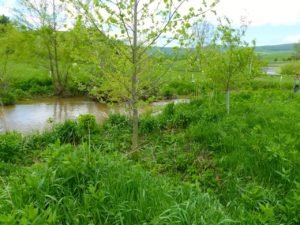 This is where the cows used to cross the river. The Sycamore in the foreground was planted by mother nature.

The river is swollen and milk-chocolate brown gurgling past the Sycamore.  It carries the wealth from farms upstream.  What was the most productive soil on a farm upstream clogs the gills of the Mayflies and smothers the eggs of the trout that would be here.  This sediment and all that is attached to it are what separate us from a healthy river and a restored Chesapeake Bay.

I lament that I have not done more…and walk on. 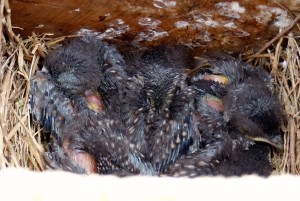 A flash of blue flies past that lifts my heart, it’s an Indigo Bunting nesting in the shrubs we planted.  Female Tree Swallows have arrived.  I see her carry small white feathers to line her nest as her mate sits on the fence ever vigil to protect her and the nest.

I check one of the Blue Bird boxes for eggs.  They’ve already hatched.

The surge of life’s energy is at its peak during the month of May here in Swoope. 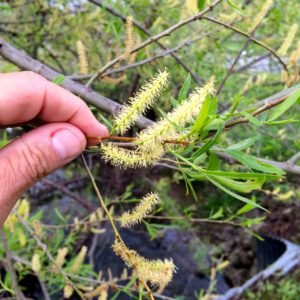 Black Willow in full bloom. This is an excellent native riparian tree.