Environmental Justice and a Burning Bridge Across the Potomac

Home Chesapeake BayEnvironmental Justice and a Burning Bridge Across the Potomac

Environmental Justice and a Burning Bridge Across the Potomac

Shepherdstown, WV: It used to be part of Virginia before our war against slavery. I’m here, standing on the southern bank of the Potomac River looking at the large windows and columns of the mansion of Ferry Hill Plantation on the northern, Maryland side of the river. I’m mesmerized, staring at it. I can imagine the reflection of the flames of the burning bridge across the river in the windows of the mansion when Henry Kyd Douglas set fire to it. It was his parents’ home. He was under the orders of General Thomas Jackson at the onset of the Civil War. I’m in some kind of history trance. I get the same feeling when I’m sitting on the beach staring at waves. I can’t describe the feeling, but I’m in wonder of some kind. 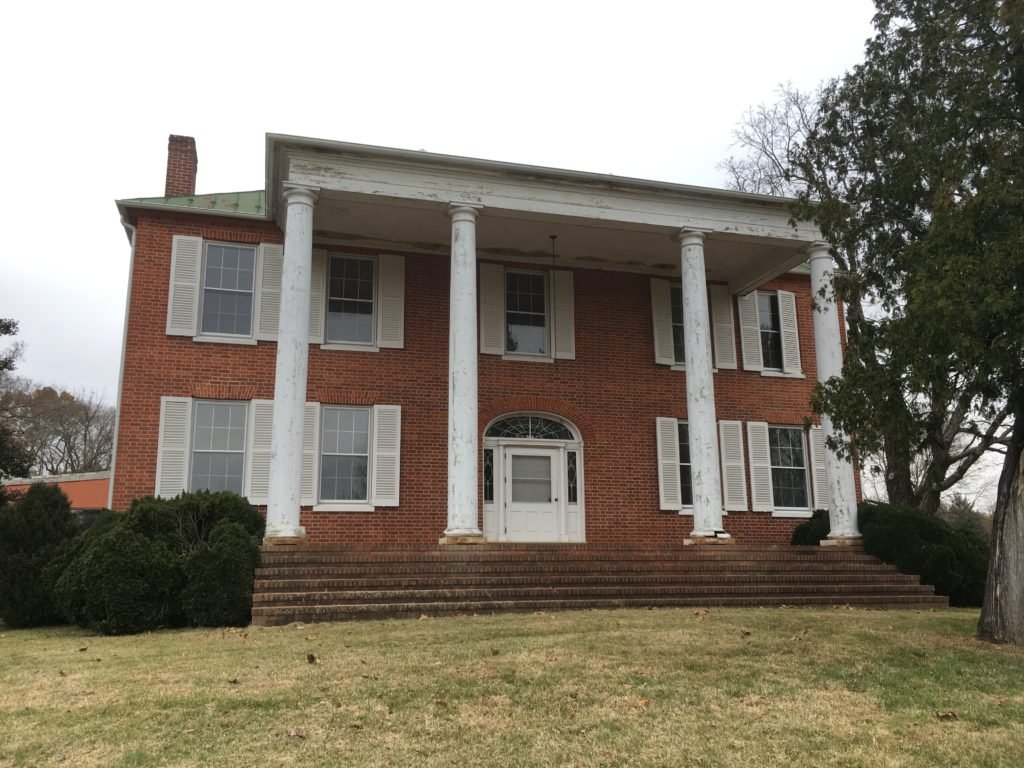 Mansion of Ferry Hill Plantation, home of Henry Kyd Douglas and his family before and during the American Civil War. Photo by R. Whitescarver. 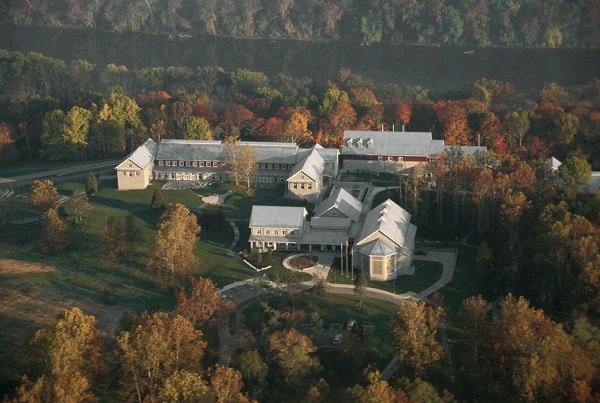 View of the National Conservation Training Center of the U.S. Fish and Wildlife Service in Shepherdstown, WV. The Potomac River is in the background. Photo from the USFWS NCTC website.

The keynote address was given by Dr. Mamie Parker. Her topic was “Better Together With a Change in Climate.” 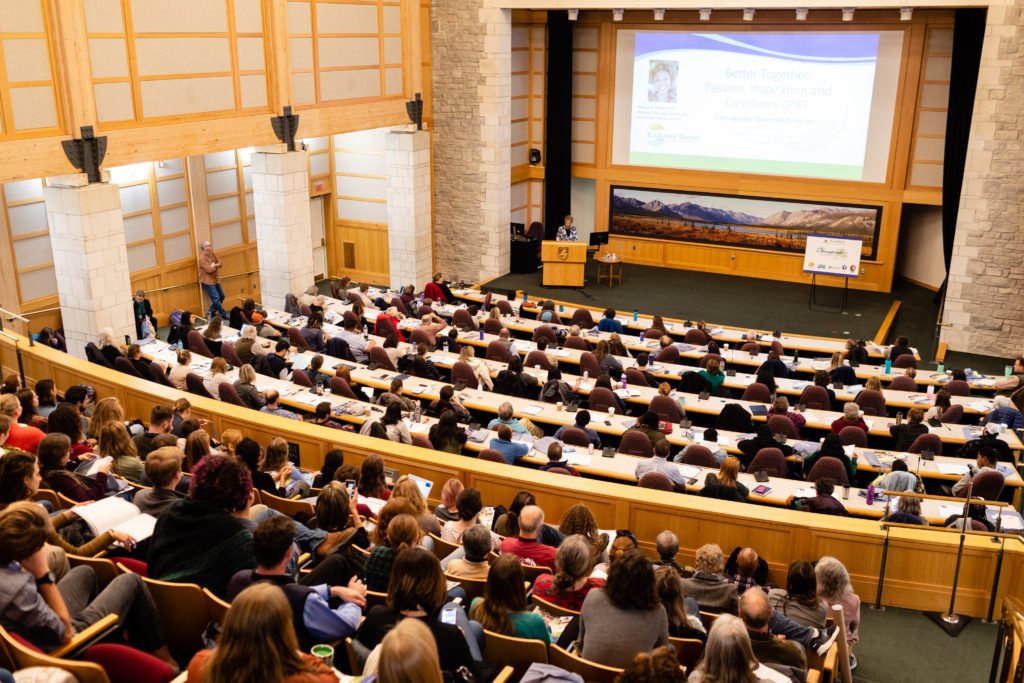 Kate Fritz, executive director of the Alliance for the Chesapeake Bay said, “I had the honor and privilege of introducing the incredible Mamie Parker, a principal with Ecologix Group and chair of the Virginia Game and Inland Fisheries Commission. Parker reminded us about ‘Passing the PIE’—an acronym she uses to stand for Passion, Inspiration, and Excellence. Her impassioned keynote included the story of her finding her way as a woman of color through a historically white agency like the US Fish and Wildlife Service. Parker reminded the crowd that when we realize we’re all BETTER TOGETHER, and if we pass the PIE, then we are truly making forward progress. Through motivation and inspiration, Parker set the tone for another fantastic weekend of Watershed Forum magic!” 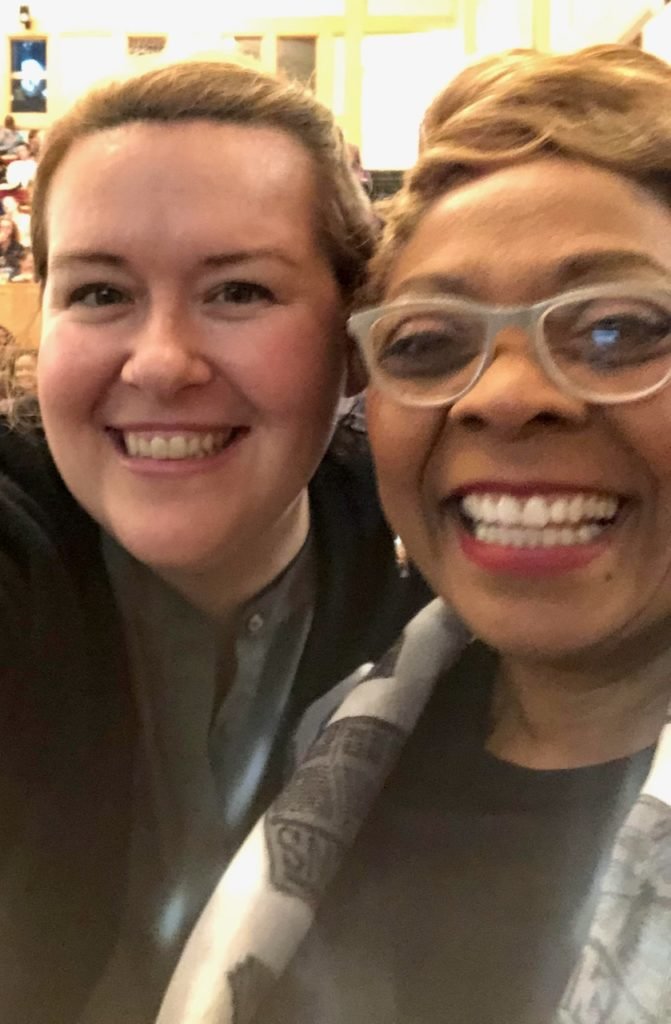 Kate Fritz, executive director of the Alliance, and Mamie Parker, chair of the Virginia Game and Inland Fisheries Commission. Selfie by Kate Fritz.

Over 400 participants are here learning about all kinds of ways to improve our streams and rivers and of course the Chesapeake Bay itself. A big part of that journey is to include everyone in this process. DEI and EJ … I heard these terms frequently. DEI and EJ are fairly new terms for Diversity, Equity, and Inclusion and Environmental Justice.

DEI is a way for individuals and organizations to denounce racism, bigotry, and intolerance and to promote diversity, equity, and inclusion in the workplace.

EJ is the fair treatment and meaningful involvement of all people regardless of race, color, national origin, or income, with respect to the development, implementation, and enforcement of environmental laws, regulations, and policies. This is the EPA’s definition.

Flames of the Burning Bridge

The environmental justice and inclusion journey started long ago. I’m looking at one of the pivotal places where it began—Shepherdstown, West Virginia (formerly Virginia). Those windows in the mansion across the river in 1861, reflected the flames of the burning bridge across the nation’s river and the war that would end the scourge of slavery in America. 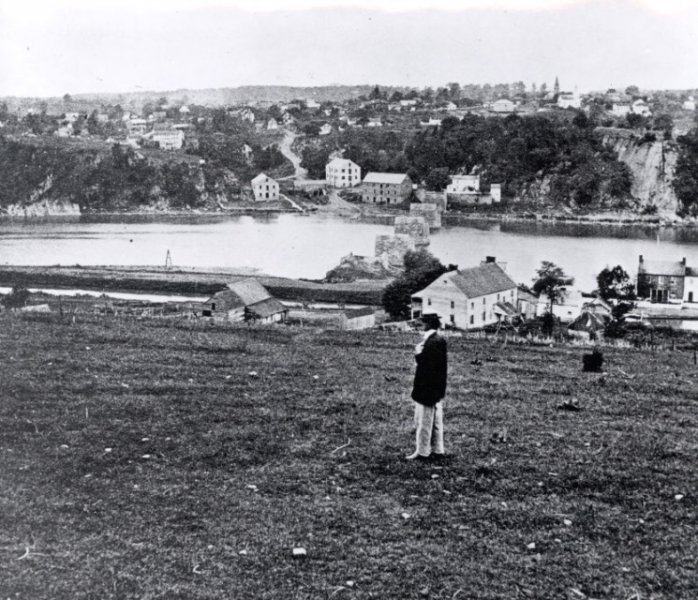 View of Shepherdstown, Virginia, circa 1861. The pillars in the Potomac are the remains of the covered bridge that Confederate soldiers burned. Notice the C&O Canal and Lock 38. Photo from the Library of Congress.

Henry Kyd Douglas was born in Shepherdstown, but in 1859 he lived just across the bridge in Maryland at Ferry Hill Place. On a rainy day late that year, the 19-year-old Douglas encountered an elderly man on the bridge. He was a newcomer to the community known as Isaac Smith. Most people considered Smith a hermit. He was having trouble getting his overloaded wagon up the steep hill after crossing the covered bridge from Shepherdstown. Douglas went home and got some horses and a driver to help the old man up the hill with his load of supposed mining supplies.

Not long afterward, the whole nation knew that the old man on the bridge that rainy day was, in fact, John Brown, the guerrilla leader of bloody Kansas and an ardent abolitionist. The young Douglas helped him haul a wagonload of spear-headed pikes to arm enslaved Africans in a planned insurrection. 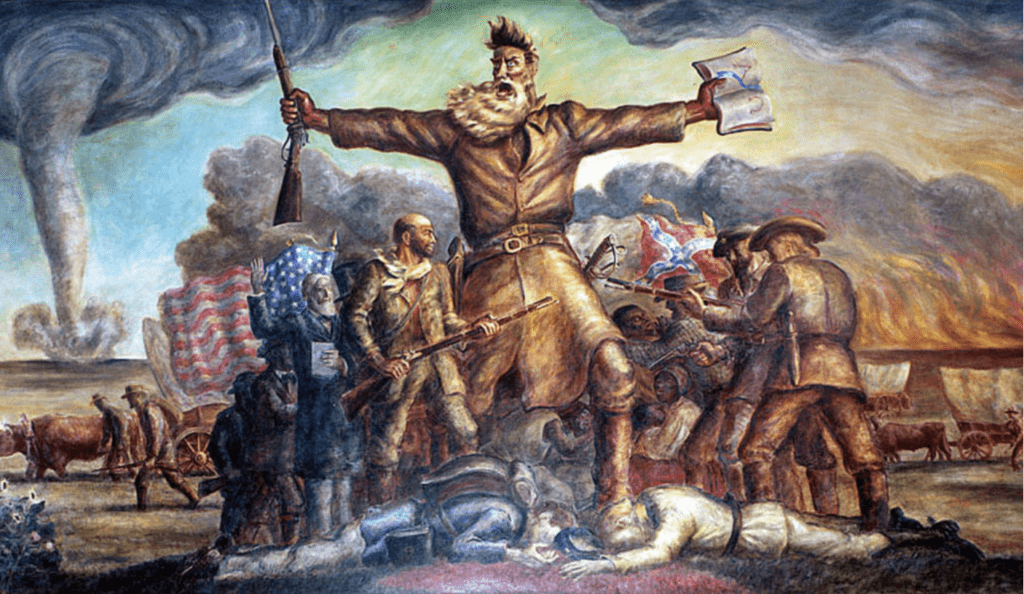 Mural by Kansas artist John Curry in the state capital of Topeka. A rifle in one hand and the Bible in the other. Photo Kansas Historical Society.

On the evening of October 19, 1859, Brown and a band of 22 men entered the town of Harpers Ferry, Virginia, took hostages, and killed several people. It was a failed insurrection … or was it?

John Brown and his followers were captured by a party of U.S. Marines commanded by Robert E. Lee who was accompanied by JEB Stuart. Both would later become generals in the Confederate States of America.

On the gallows in front of hundreds of onlookers, Brown uttered his last words, “I, John Brown, am now quite certain that the crimes of this guilty land can never be purged away but with blood.” 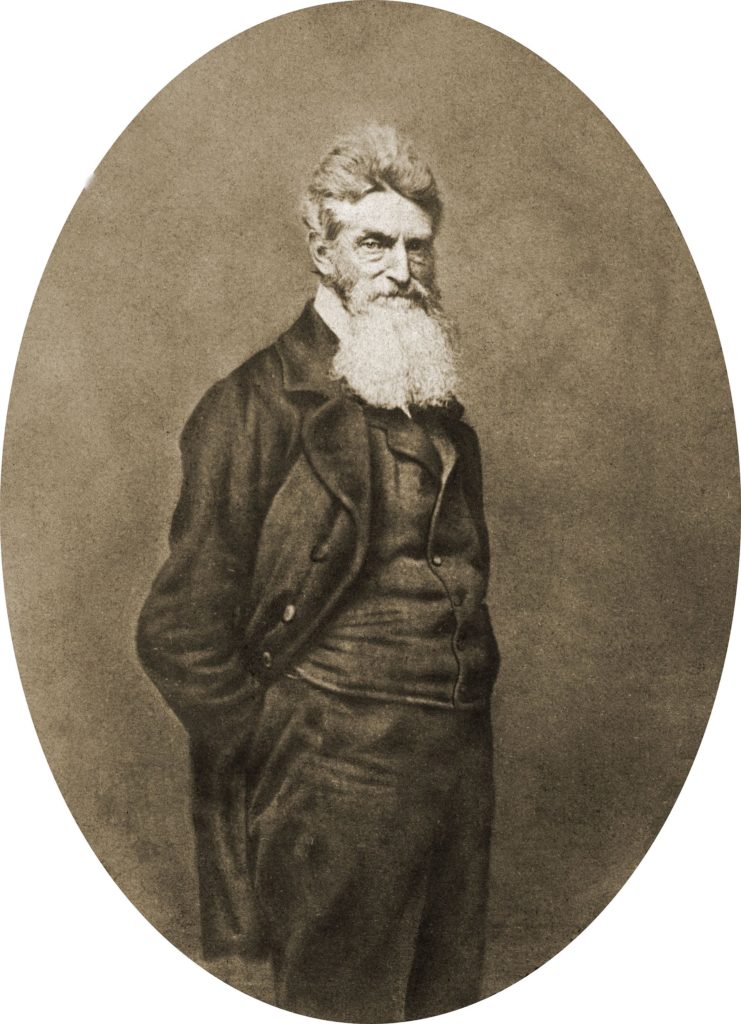 John Brown, 1859. Photo from the Library of Congress.

Virginia seceded from the Union on April 17, 1861. The young Douglas had no doubt of his duty to serve with Virginia. He enlisted as a private in Shepherdstown’s Company B. Not long after, he was in General Thomas Jackson’s command and in the regiment ordered to Shepherdstown to burn the bridge across the Potomac. His home, Ferry Hill Place, was on the northern side of the river.

Glare of the Burning Timbers

In his book, I Rode With Stonewall, Douglas describes his feelings when he torched the bridge:

I was with the regiment that marched to Shepherdstown to destroy the bridge of the Potomac at that point. I was with the company that set fire to it, and when, in the glare of the burning timbers, I saw the glowing windows in my home on the hill beyond the river and knew my father was a stockholder in the property I was helping to destroy, I realized that war had begun. I knew that I was severing all connection between me and my family and understood the sensation of one, who, sitting aloft on the limb of a tree, cuts it off between himself and the trunk, and awaits results.

New Bridge to Diversity and Inclusion 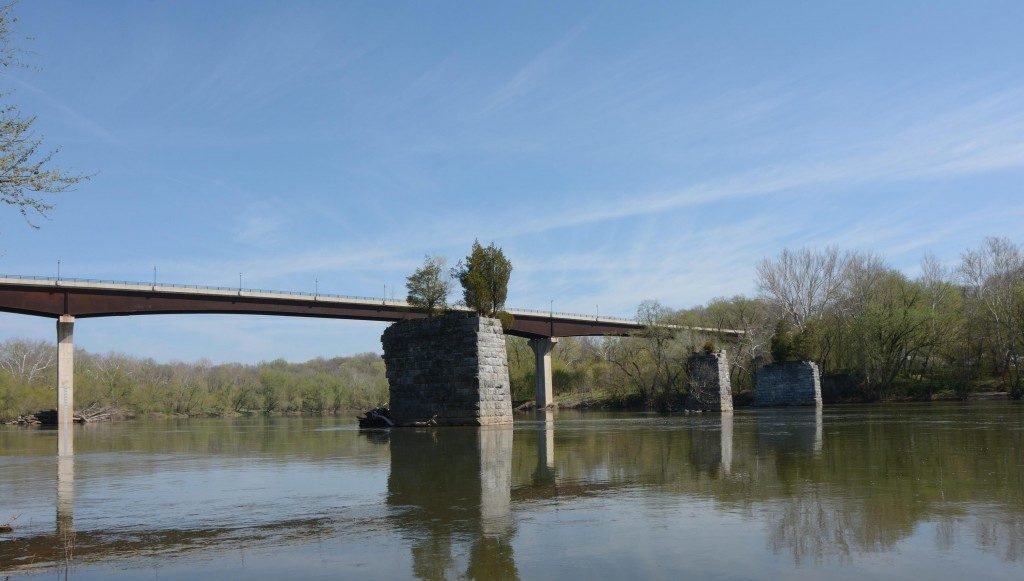 There’s a new bridge over the Potomac at Shepherdstown. And there’s a new bridge to cleaner streams and a healthier Chesapeake Bay—DEI and EJ: diversity, equity, and inclusion and environmental justice. Truly, if we couple DEI and EJ with passion, inspiration, and excellence—PIE, we will achieve cleaner streams, cleaner air, and a restored Chesapeake Bay.

So, please, pass the pie.