Native Plants Can Be Invasive

Home BirdingNative Plants Can Be Invasive

Native Plants Can Be Invasive

I finally found a plant that will take over tall fescue – wingstem, but I’m not sure I like it.  Let me explain.

Both plants are invasive, tall fescue (Festuca arundinacea) is a non-native invasive plant; wingstem (Verbesina alternifolia) is a native plant that is invasive. 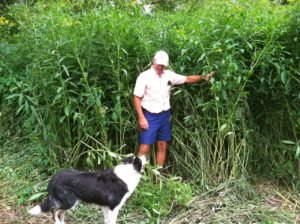 The author with best friend Dexter in Wingstem “grove”. This Wingstem grove is clearly at least eight feet tall and has taken over. It is a monoculture.

What is an invasive plant?  One definition is “any plant species whose introduction to the ecosystem under consideration will cause economic or environmental harm or create health risks”.  Both native and non-native plants could fit this definition.

Goldenrod is a Native Invasive

Goldenrod (Solidago) is a good example of a native plant that can be invasive.  It can also be a great plant in your garden.  It has beautiful blooms and attracts many beneficial 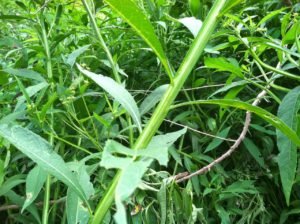 Wingstem stems have “wings” running longways along its stem.

insects; however, it can take over your whole garden.  To the nursery industry or to cattle farmers it can be an aggressive plant taking over space that more desirable plants could have occupied.   Goldenrod occupying the space where one wants native purple coneflower would have to be pulled up by hand, killed with herbicides or controlled with some other method.  It can literally take over a flowerbed or take over acres of pasture.

Another example of a potential native invasive is the Black Cherry tree.  Granted it is a grand tree with gorgeous wood and fruit for wildlife but on a cattle farm, it is undesirable and invasive along hedgerows.  Its wilted leaves are deadly to cattle.

Going Native is Not Maintenance Free

In our riparian buffer along Middle River, we are trying to maintain an ecosystem that is native with as much biodiversity as possible which includes trees, shrubs, forbs, and grasses – all native, of course.  It isn’t easy.

First we fought tall fescue and now we are fighting wingstem – it’s taking over!  Wingstem is a delightful native plant and we welcome some of it but we don’t want a monoculture of it.  The cows would eat some of it but we don’t want our cows in the riparian area – they would also eat the trees we are nursing along.  Our goal is bio-diversity and a cleaner stream.  I so want to “de-list” Middle River from the state’s “dirty waters” list. 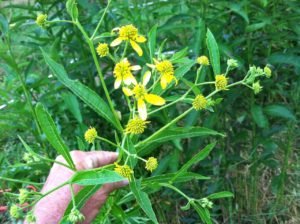 We are now mowing as much of the wingstem as possible – we will never get it all.  When it re-sprouts I am going to apply an herbicide to attempt to kill it.  In late November we will plant native shrubs and trees in the same place the wingstem was.  It won’t be the end of them.  You can’t plant your shrubs and trees and just walk away.  Tending to a native community takes a lot of maintenance.