Why I Hate Tall Fescue

Why I Hate Tall Fescue

Note: This article was written for the Bay Journal News Service which was published on May 27, 2014.  It was titled, “Please, Step on This Grass”.  Click here for a pdf copy.

I was in the Farm Coop store the other day in line to buy some garden seeds. The farmer in front of me ordered fifty pounds of Kentucky 31 Tall Fescue. I thought, “Oh my God, you poor dear, haven’t you heard”? 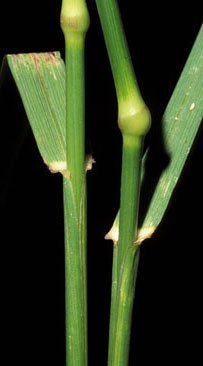 Close up of Tall Fescue.

Those seeds are infected with an internal fungus that secretes an alkaloid that will be toxic to your livestock.

We should not plant another seed of Tall Fescue. Not only is it invasive and non-native (it’s native to Europe), it is toxic to just about everything that consumes it and it inhibits the growth of other plants.

Tall Fescue (Festuca arundinacea) is one of the most dominant grasses found in pastures, hayland, lawns, roadsides, wetlands and vacant lots throughout most of North America. It is almost always infected with an internal fungus, an endophyte (Acremonium coenophialum), which produces an alkaloid (ergovaline) that is toxic. 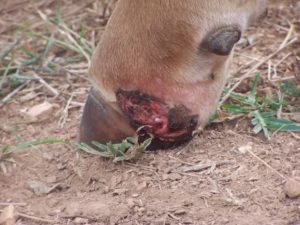 Cattle grazing too much Tall Fescue can get “fescue foot”, a crippling condition caused by the toxins in the grass.

In wildlife biology Fescue is known as the “F” word. According to most wildlife biologists, it is the number one reason our Northern Bobwhite populations have plummeted. That’s because Tall Fescue forms a sod or mat so thick a bird can’t walk through it. Tall Fescue seeds are also toxic to birds. Fescue also creates excellent habitat for meadow voles, which attracts hawks and hawks also kill Bobwhites.

Tall Fescue is toxic to just about anything that eats it. Google it. It’s toxic to dairy cows, beef cows, horses, sheep, goats, birds, grasshoppers, ants and even nematodes. It also cuts down on biodiversity because it takes up space that native biota could have occupied and it’s aggressive. 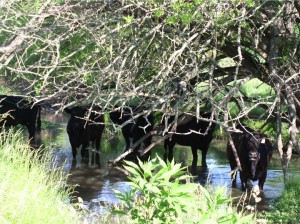 Cattle eating tall fescue during the summer will have elevated body temperature making them hot.  They will spend more time trying to cool off than eating which lowers weight gain.  Livestock should be excluded from streams because they destroy the stream banks and defecate in the water.

It’s also toxic to newly planted tree seedlings. This is called allelopathic, when one plant exudes a substance into the soil that inhibits the growth of other plants. This is one of the reasons many riparian forest buffer plantings failed. A two-year-old hardwood seedling inserted into a mature sod of Tall Fescue not only has to compete with the established fescue roots for nutrients and water; it has to overcome the toxins secreted by the endophyte in Tall Fescue. 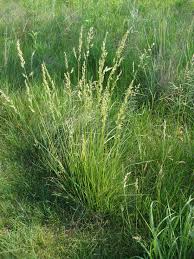 It’s persistent in the landscape. I call it the toxic waste of the grass kingdom. It is difficult to get rid of. I once had a client tell me he bought a farm with Tall Fescue pasture. He wanted wildlife habitat. So he just “let it go” hoping natural succession would take place. Ten years later it looked exactly the same. The Tall Fescue formed such a dense mat that no seed could get through it and even if it did the allelopathic toxins would cause its demise.

So why does USDA still recommend it and how did it get here in the first place?

A brief history: Livestock farmers are always looking for grass that can produce feed for the longest period of time. University of Kentucky agronomists found what they thought was the “holy grail” of grasses in 1931 in a “holler” in the winter…it was green when all other grasses were dormant. They collected the plant and propagated it. The University released it in 1943 under the name Kentucky 31 Tall Fescue.

Oops. They did not know the plant had an internal fungus that produced an alkaloid that is toxic. We’ve been promoting it ever since, even though we discovered the toxic relationship in the 1970’s.

Tall Fescue is good for erosion control because it is aggressive and can withstand abuse. Cattlemen have been using it for years to “stockpile” as winter grazing. In other words, they take their cattle off of it in August, fertilize it with nitrogen, let it grow. then graze it during the winter. It is excellent forage in the winter because the toxins aren’t active in cool temperatures. 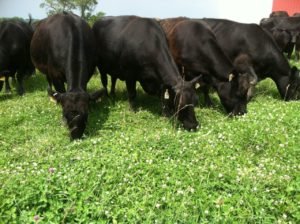 We have diluted the tall fescue in our pastures by over-seeding them with clovers.

Okay, it’s everywhere and difficult to get rid of it. How do we deal with it? The first line of defense is to dilute it. Graze it hard then over-seed with clover. There are “endophyte free” varieties of Tall Fescue but these have not proven long-lived.

Two effective ways to kill Tall Fescue include tilling it to death, or a couple of applications of herbicide. Once killed, plant a more desirable forage.

The best remedy though is to never plant another seed of endophyte-infected Tall Fescue. There are many other kinds of grass that can produce forage for livestock without the side effects of the endophyte such as Orchardgrass and smooth brome. Let’s use them.