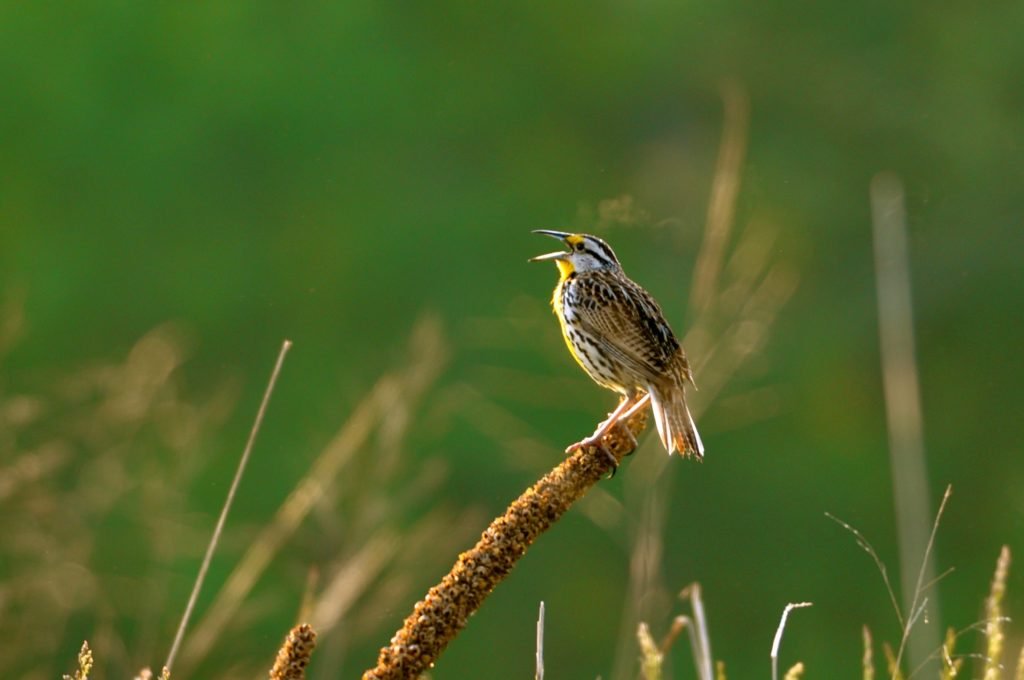 The sun’s energy has transformed our brown pastures into green carpets of food for our beef cattle. The surge of spring is upon us. Red Wing Blackbird males are singing their shoulders off, “Concareeee”.  Meadowlarks are singing, “Spring of the yearrrr”.  Because of the vast grasslands in Swoope their populations are not declining here.  Elsewhere they are, along with other grassland species of birds.

We have eighty-three calves on the ground; eight heifers to go and 19 cows. We live and work on a cattle farm in the famed Shenandoah Valley of Virginia. 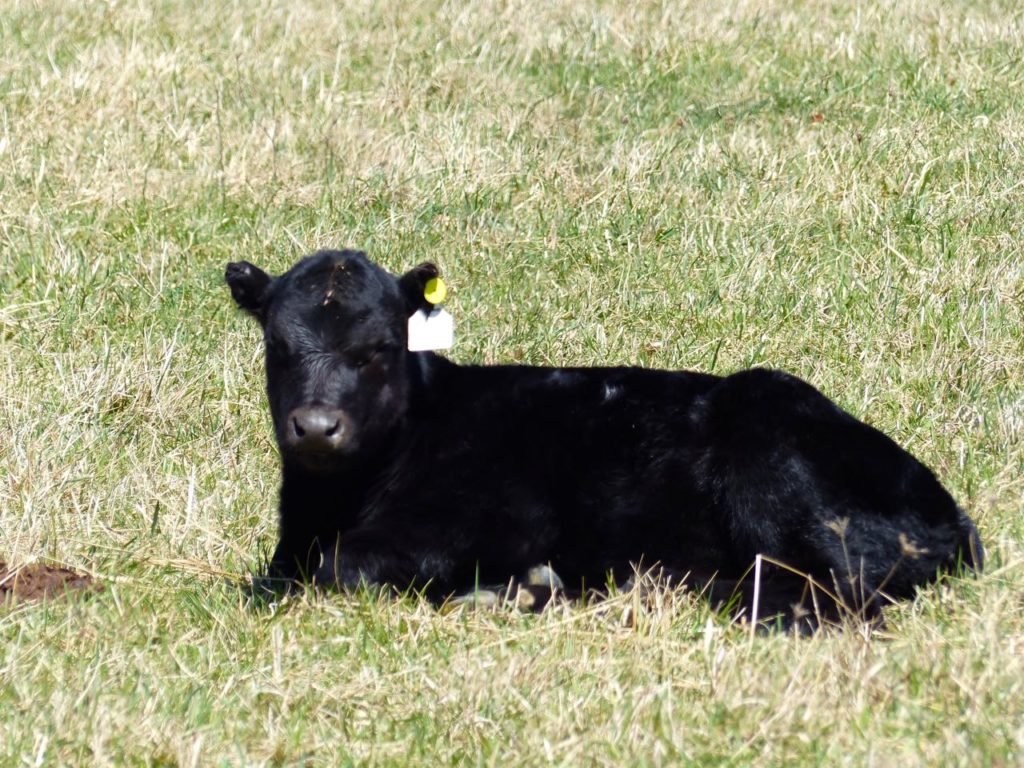 Calf #116 a.k.a. Mickey. The ends of ears froze off during Winter Storm Thor

By the time it arrived on March 5th, six cows had calved and snow covered the ground.  Eight were born during the storm.  It was the worst possible weather for calving; thirty one degrees with snow and freezing rain.

During the storm, cow #116 delivered her baby, unbeknown to her, into a groundhog hole. He never got up. When we found him he was in the process of dying from hypothermia. We brought him in and placed him in the calf “cooker,” which is a big “lunch box” looking container with a heater and fan. After about seven hours in the cooker he warmed up enough to begin a calf’s instinctual sucking motion with their mouth; time for him to go back to his mother. We fed him a bottle of colostrum to “jump start” him, loaded him in the tractor and dropped him near his anxious, waiting mother. They literally hooked up – “mouth to teat”, in less than a minute. Several weeks later we noticed the ends of his ears had frozen off so his head looks just like a mouse. We nick named him Mickey.

Another calf, red tag #121, also born in the storm, lost part of his left ear. Most likely a cow stepped on his ear while he was sleeping and as he jerked awake the tag and part of his ear came off making it sort of pointed. We call him “Spock”. 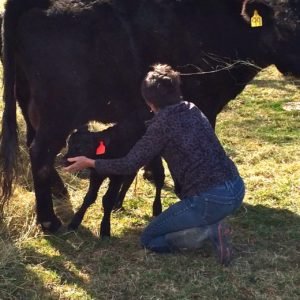 Jeanne training a calf to nurse in the field. 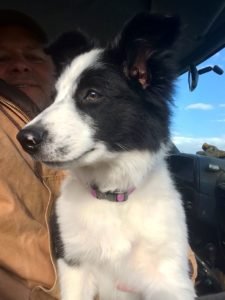 Yellow tag #99 successfully delivered twins on March 17th. She knew they were both hers but favored only one. She would smell and lick #2 but wouldn’t let him nurse. Jeanne tried for two days to get her to accept both babies. As a distraction, a pan of grain was offered while Jeanne positioned the hungry baby at the teat. Jeanne does magic with cattle and they trust her.  She milked the cow right in the field and trained the unwanted baby to nurse. After two days the mother still did not accept the second baby without grain.  He’s now a bottle baby in the barn enjoying three meals a day.

We have a new addition to our family, a Border Collie puppy, “Valentino” or Val for short. His mother hails from a working sheep farm in Highland County, Virginia and his father hails from our neighbor’s working cattle farm in Swoope, Virginia.  He is fitting right in. 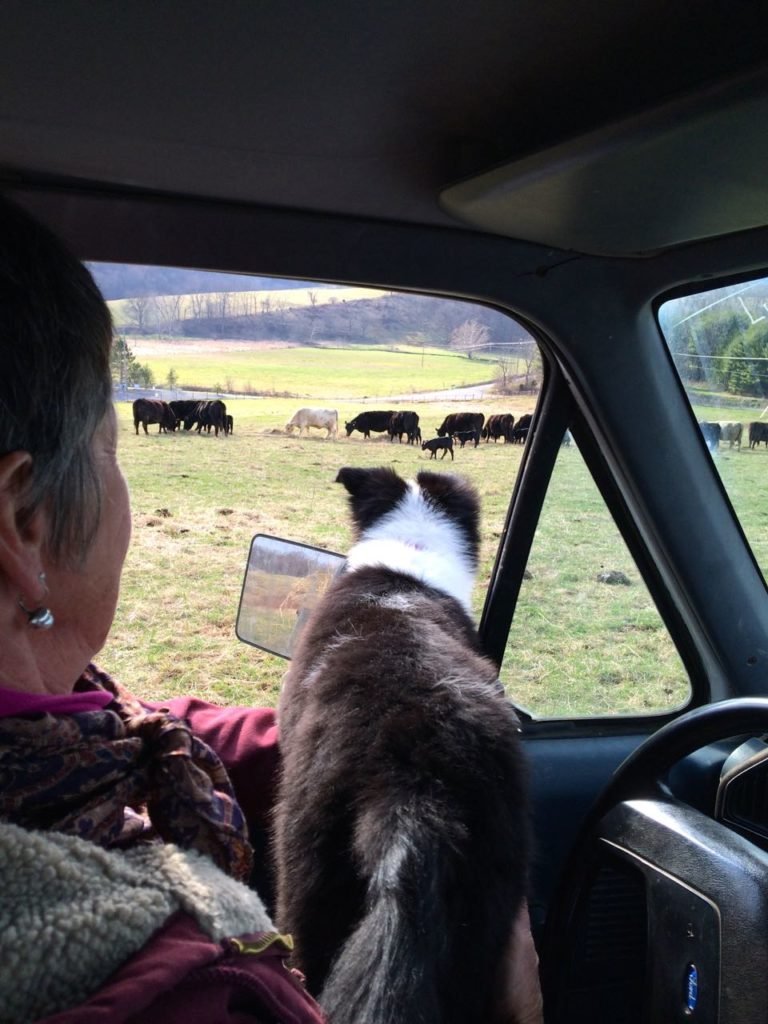 Valentino immersed into the farm.  Click on this image to see a 13 second video.