May miracles in Swoope

Lush, green pastures fill the landscape, here at the beginning of the Chesapeake Bay in the Shenandoah Valley along Middle River. Baby calves form up in groups and run fast with their tails high in the air. The smell of lilacs fills the air. A new migratory bird arrives every day. Yesterday it was a Yellow-Billed Cuckoo. Today it’s a Great Crested Flycatcher. The birds fill the air with song during the day, Tree Frogs and a Gray Catbird sing during the night. The Black Locust trees are in full bloom creating a tall hedgerow in the pasture that is almost pure white—it’s a superhighway for bees. The energy of the Earth surges with new life. May miracles abound. 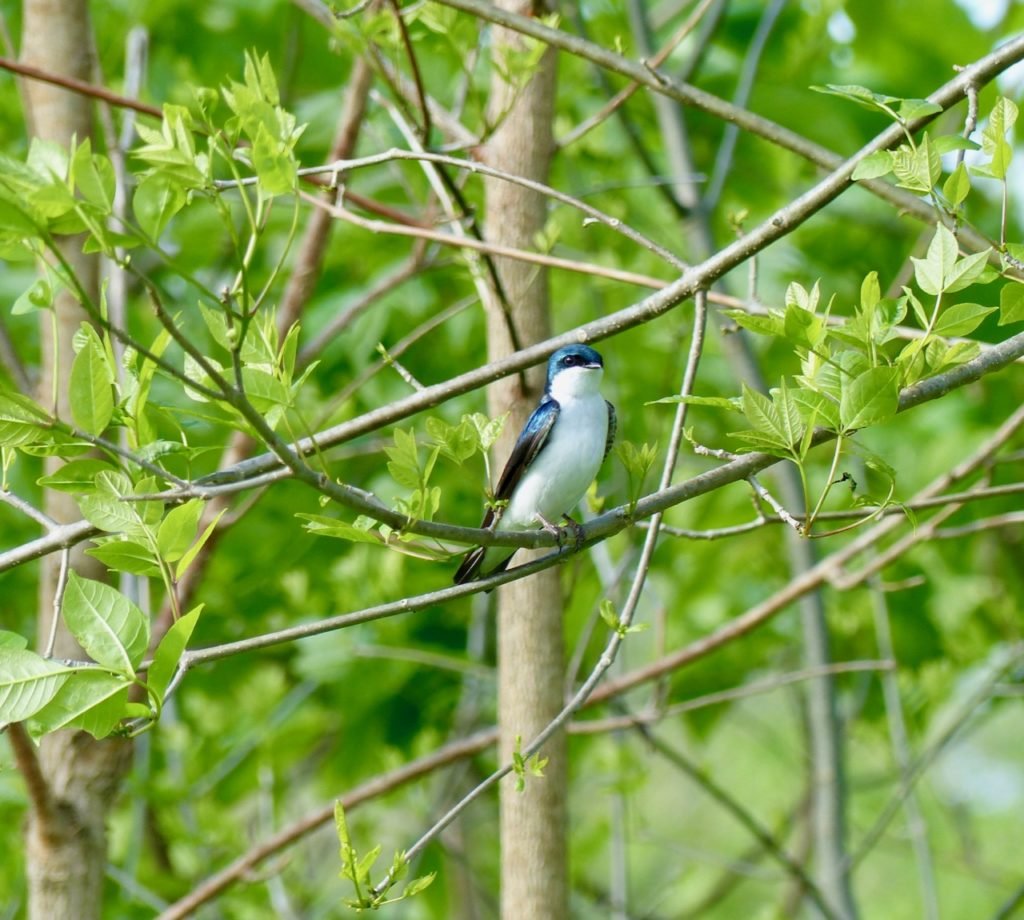 A Tree Swallow guarding a nest box at the river. These birds lay eggs this month. Photo by R. Whitescarver 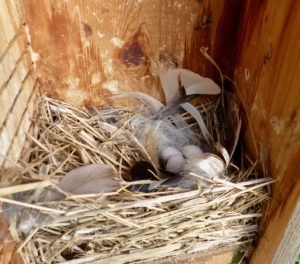 May is when the cool-season grasses in the pastures send up their seed heads. I can’t get over how fast the pastures grow in May. Our herds of cattle will not be able to keep up with the growth. Hopefully, we will be making hay soon with the excess forage. Cow R152 had twins and accepted both. That makes our fourth set of twins this year—May miracles. 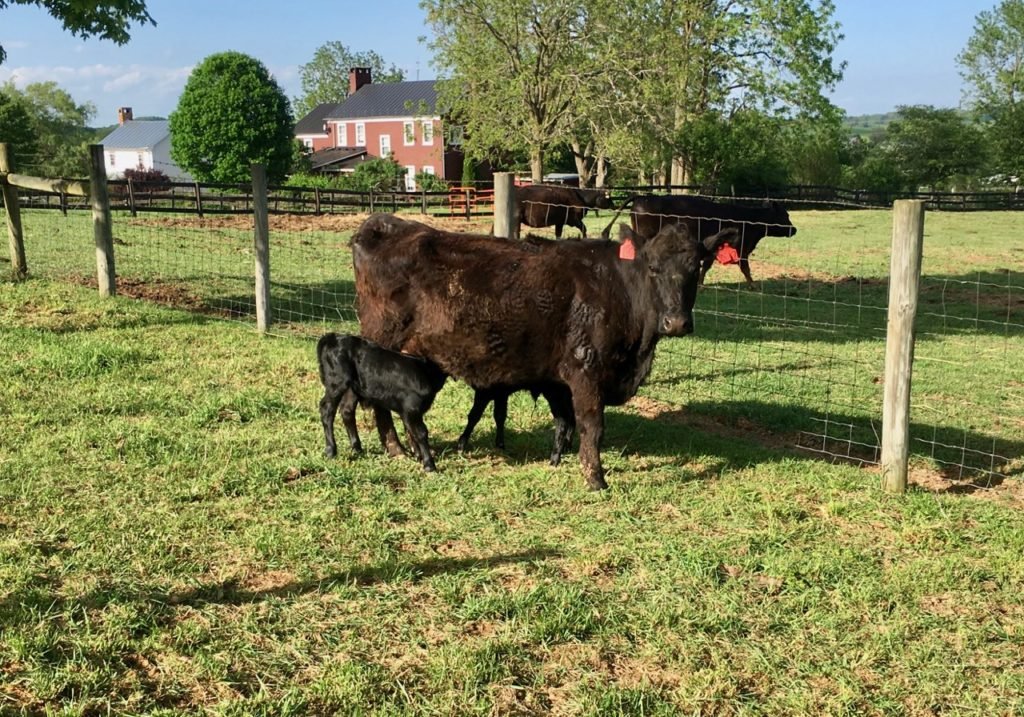 Miracle Twin—Story of the Year

Cow 46 was in labor but acting strange. We had to get her in to investigate. We trapped the cow in the head-catch. Jeanne put on an arm-length, plastic glove and put that arm into the cow’s womb. She couldn’t feel anything.

“It’s like a garage in here,” she said as her arm moved around in the womb.

I held the cow’s tail while Jeanne put her arm all the way into the cow’s womb up to her armpit in search of a baby. Her head was sideways against cows hind end. Way down inside, near the cow’s udder she felt something hard. But her arm wasn’t long enough to figure out what it was. She called our neighbor, Bill to come help.

In a few minutes, he arrived and got in the chute alongside Jeanne. His arm went all the way into the womb. He felt the hard something too and asked Jeanne to put her arm in alongside his. It was a breech baby, positioned to come out butt first. Evidently, the cow had tried to deliver the baby and eventually gave up.

Jeanne and Bill managed to unfold the hind legs of the breech baby in position to extract. They put small chains on the calf’s feet and hand-pulled the calf out. It was dead. We were all silent and sad.

“A vet told me a long time ago to always go in after you pull a calf to see if there is a twin,” Jeanne said.

She went back into the womb and sure enough, she felt a nose . . . and a leg. One leg was back so she repositioned the legs and she and Bill pulled the calf out. It was ALIVE! Another May miracle. Everyone was happy-crying.

We keep trying. And hoping. That one day, the American Chestnut will be re-established in our forests. Once the grandest, tallest, and fastest growing tree in North America, this tree has been minimized to mere stump sprouts that die back every few years. The culprit: a pathogenic, invasive fungus from southeast Asia, called Chestnut blight. The fungus consumes and destroys the tree’s cambium layer. Dedicated scientists and chestnut enthusiasts have been working for decades to find a cure or resistance using natural selection, back-cross breeding, and bio-engineering to bring this tree back to life in the forest. The American Chestnut Foundation (TACF) helps lead the efforts. 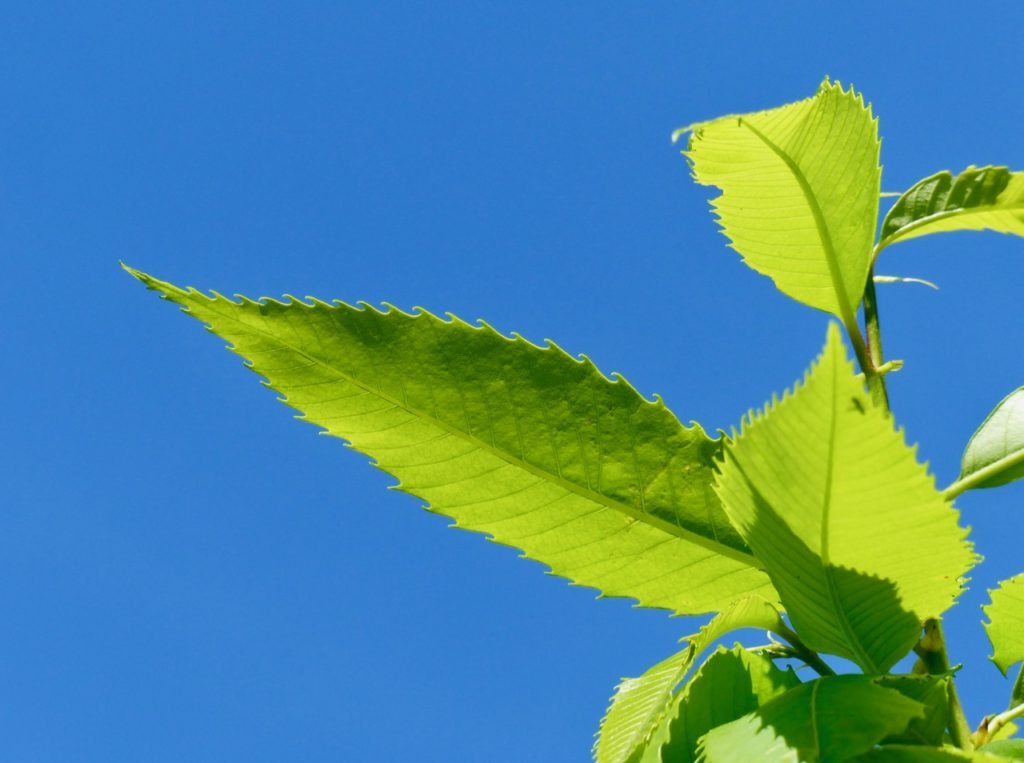 Hope in a Nut

Three years ago one of the nuts I received from TACF germinated and is now eight feet, eight inches tall! It is healthy and growing strong. The nuts they send out are called Restoration American Chestnuts 1.0 because they are 15/16 American Chestnut and 1/16 Chinese Chestnuts. That 1/16 Chinese gives the tree resistance to the fungus. In addition, the nuts came from three generations of breeding and selecting for blight resistance. This year, three of the nuts I received have germinated. There is a lot of history, science, and hope in these nuts. May miracles in Swoope. 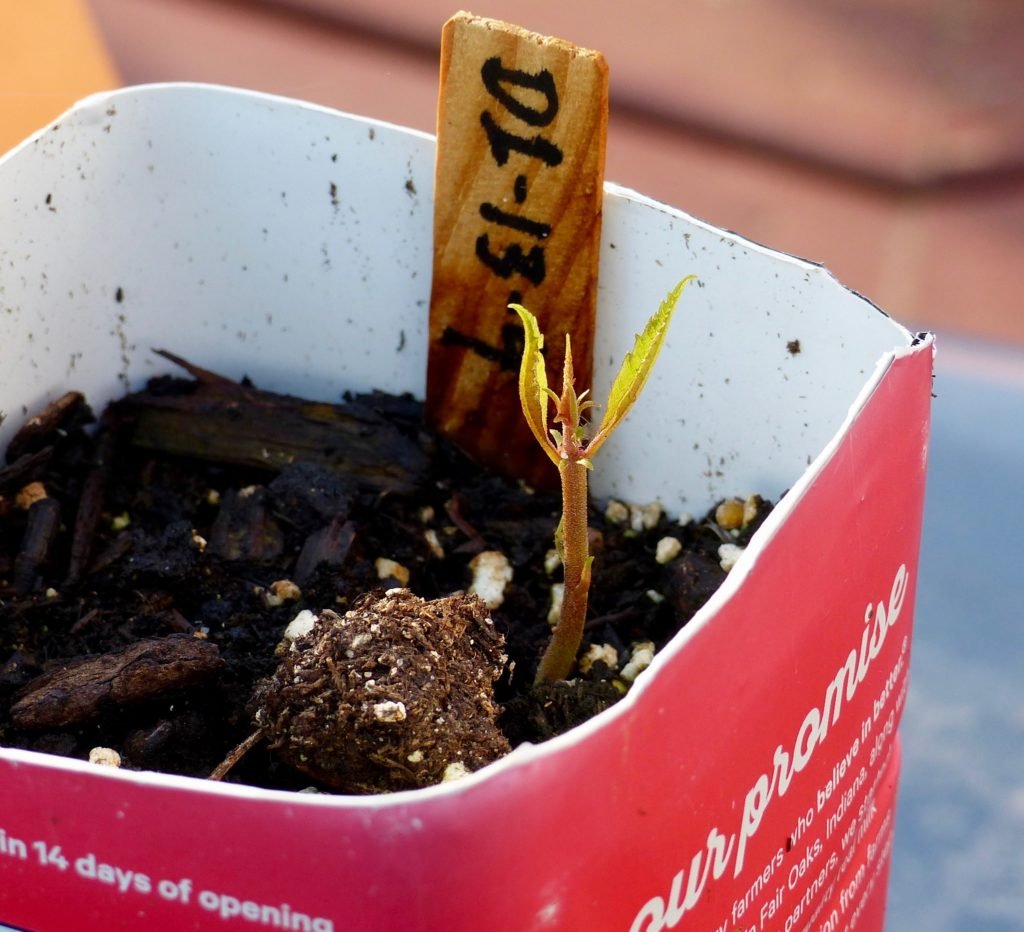 Germination of a Restoration American Chestnut 1.0. Photo by R. Whitescarver

The Pawpaw tree is one of our best riparian trees. It has perfect flowers. That means each flower has both female and male sex organs. Yet, the flowers are almost always sterile because the female organ, the stigma, matures and dries up before the male organs, the anthers, shed their pollen. This is called Protogynous. 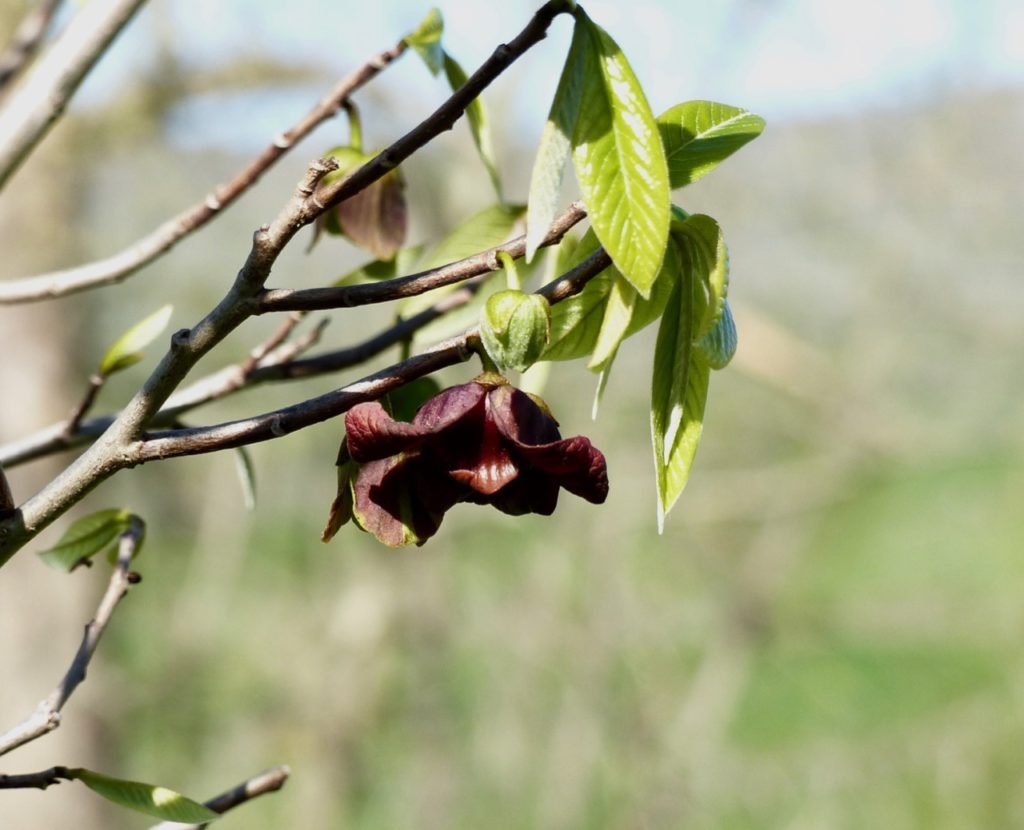 A Pawpaw bloom. Although it is a perfect flower, It’s practically sterile. Photo by R. Whitescarver

It’s a miracle if the flower self-fertilizes. There are tales of people hanging road-kill in the trees to attract flies to cross-pollinate the flower so the tree produces fruit, which, by the way, is the largest native fruit in North America.

Many Green Ash trees have died on the farm because of the destructive, non-native, invasive Emerald Ash Borer. The larvae eat the tree’s vascular system and the trees die from lack of water and nutrients. 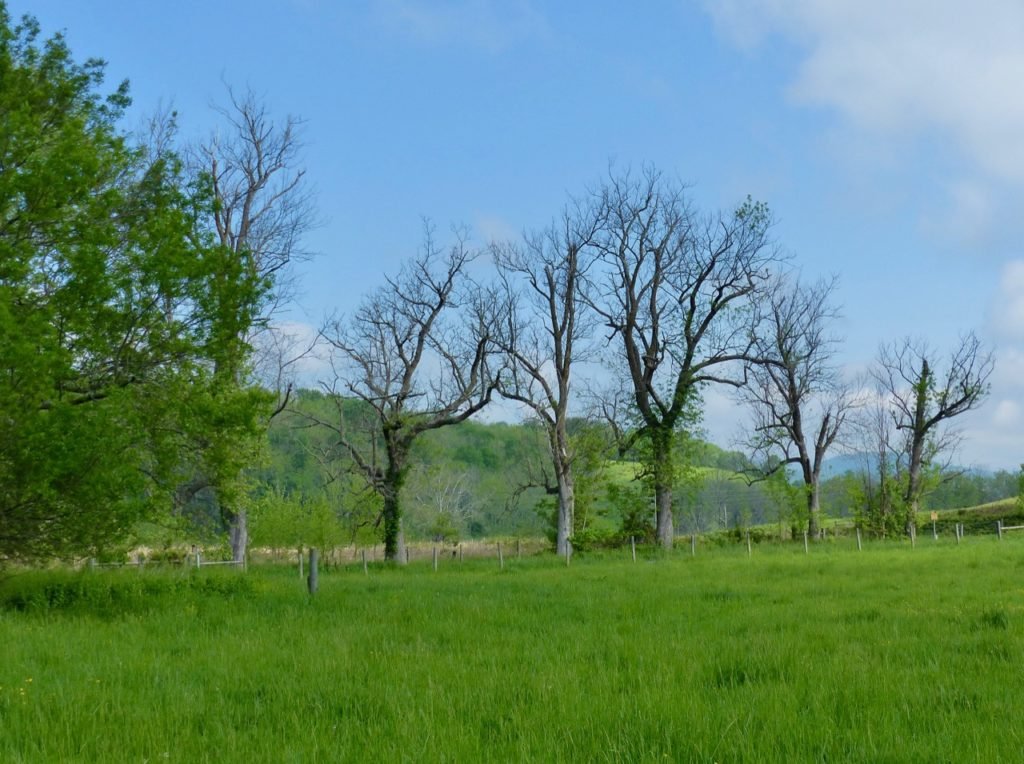 These Green Ash trees along Trimbles Mill are dead or dying as a result of the Emerald Ash Borer.

The young Green Ash trees along the river have not been infested yet and we hope they never will. The Virginia Department of Forestry offers treatments and assistance for this and other pests. Contact them for more information.

This Valley is Special—Conserve It