This is an OPED piece I wrote for the Bay Journal News Service which was published on 8/19/2014.  I have added photos and links.  Here’s a link to the Downstream Project’s Amy Matthews Amos blog about it.

Surviving a heart attack is a huge wake-up call that usually warrants a change of diet. Toledo, Ohio just survived a heart attack!! Their drinking water from Lake Erie became toxic because of a huge algae bloom. Algae blooms are caused by too much nitrogen and phosphorous in the water. It’s their wake up call and it’s time for a change of lifestyle. 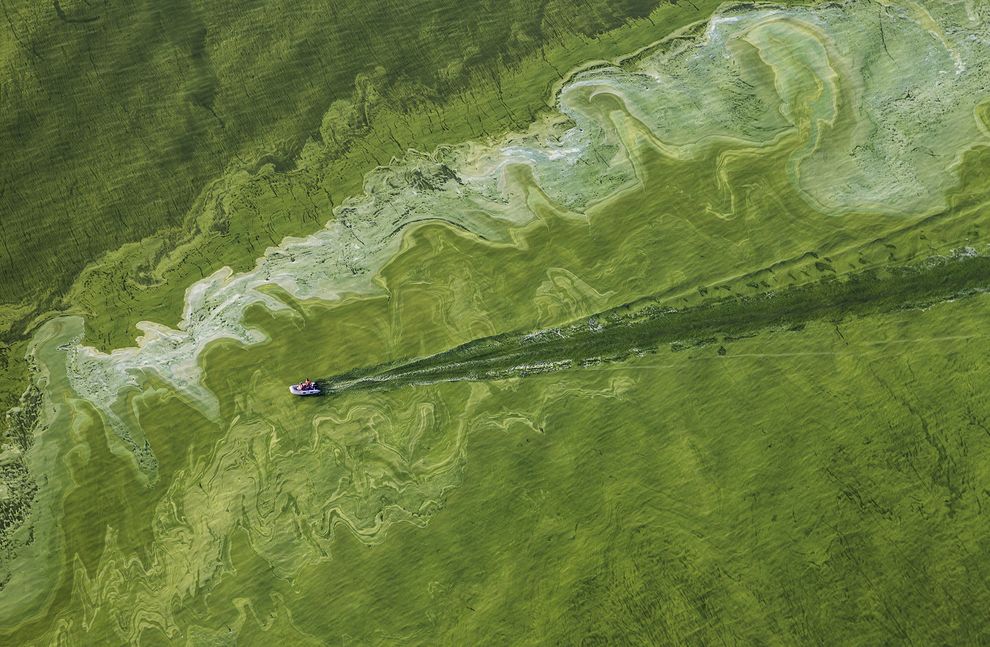 The algae that caused Toledo’s heart attack is naturally present in most water bodies including all of the Great Lakes, the Chesapeake Bay, the Albemarle Sound and the Gulf of Mexico.

Too much nitrogen and or phosphorus (nutrients) can cause these algae to grow to enormous sizes called “blooms” giving off toxic substances that harm humans, wildlife, and the aquatic ecosystem. Algae blooms are also responsible for “dead zones” which are areas in water bodies so depleted of oxygen nothing can live.

Nitrogen and phosphorus are major components in fertilizer, manure, and sewage. Improper use of these nutrients contaminates our streams when rainwater washes off agricultural fields, feedlots, lawns and golf courses. Failing septic systems and outdated wastewater treatment plants also contribute to the excessive nutrient loading of our streams.

Reducing nutrients in our streams and rivers is the cure; some call this a “pollution diet”. We have a “pollution diet” underway right now in the Chesapeake Bay watershed and it is working. Nitrogen and phosphorous levels in the Chesapeake Bay have been cut in half since the mid-1980’s despite the fact the population in the Bay watershed increased 30 percent from 13.5 million in 1985 to 17 million in 2012. This is an incredible achievement! The “diet” is working.

Reducing nutrients in streams is not rocket science. We know how to do it. Each of the six states in the Bay watershed came up their own “pollution diet” to reduce nutrient loading into their streams and rivers. These six plans were approved by the Environmental Protection Agency several years ago and together form the Chesapeake Clean Water Blueprint.

The Blueprint is Working

Lots of people are working together to implement the Blueprint. Farmers are fencing their cows out of the streams, planting riparian buffers, using fertilizers more responsibly and reducing soil erosion by using no-till methods and cover crops during the winter.

Local and state governments are investing in sewage treatment upgrades that remove nutrients from their discharges. People in cities and suburban areas are using less fertilizer on their lawns. Legislatures are passing laws encouraging
nutrient management and have eliminated phosphorous in lawn fertilizers. Citizens are paying stormwater utility fees to help fund stormwater management projects.

There are deep-pocketed lobbyists from outside the Bay watershed that don’t like the pollution diet for the Bay. The Fertilizer Institute, the American Farm Bureau Federation, the Corn Growers Association, the National Pork Producers Council, the National Chicken Council, the National Association of Home Builders and other lobbying groups associated with activities that contribute to nutrient loading are suing the Environmental Protection Agency over the plan to restore the Chesapeake Bay.

Even more disturbing is the fact that the attorney generals in twenty-one states, most of them in the Mississippi watershed signed “friend of the court” briefs on behalf of these deep-pocketed lobbyists. Meanwhile, Toledo can’t use their water and the dead zone in the Gulf of Mexico remains the second largest in the world.

Clean water is a choice. The people of the Chesapeake Bay watershed have agreed on a plan to get there. Successful implementation will result in safer and more abundant seafood, jobs and tourism. We will have a healthier world; something we can be proud of.

The red states are the ones supporting the lawsuit against the Chesapeake Clean Water Blueprint. Click on this image to help us defend clean water.

I lament that we have to waste time and money on a lawsuit because we want/need cleaner water.

What happened in Toledo is unfortunate and tragic. For a remedy, they need to look no further than the Chesapeake Clean Water Blueprint. It’s a “pollution diet” that is working.