January 30, 2012 Nature, Swoope Almanac, Trees 5 Comments
Aldo Leopold wrote eloquently about an ancient log he placed on the andirons of his fire in A Sand County Almanac published in 1949. The chapter was “Good Oak”.  Below is my lament for a log I placed on the andirons of a fire we had in the summer kitchen fireplace at our home in Swoope, Virginia last week.
I held the old log in my hands and before I placed it on the fire I reverently thought about the distinguished service that tree had provided and all the history it must have seen.  It started growing in 1619.  That’s the year the first representative government was formed in the New World which was the House of Burgesses in the Virginia Colony.  Ironically it was the same year the British brought the first African slaves to Jamestown.
The Oak seedling was just germinating and I’ll bet the rabbits ate the new seedling for seven years before it had a root big enough to send a shoot up that could out grow the height of rabbits in a single year.  That would have been about 1625, the year King James I died.
The Oak grew tall and straight for 125 years.  It provided food and shelter for wildlife, sequestered tons of carbon, pumped tons of oxygen into the atmosphere, transpired thousands of gallons of water and provided shade to the forest floor.  Eastern Bison roamed under its branches and ate its acorns.  Passenger Pigeons and Carolina Parakeets roosted in its branches.  It saw Indian hunting parties and it saw the first European settlers around 1725.
In 1750 the Oak was selected to provide logs to build the first pioneer log cabin west of Staunton which still stands within site of our house.  In the next century most of the trees in the Valley would be cut to make way for agriculture and the new European way of life.  The Eastern Bison, Passenger Pigeons and Carolina Parakeets would become extinct. 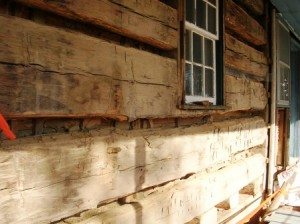 Log cabin at Cattleman and Livick Road, built circa 1750. Most of the logs are 18″ wide.

By 1850 the Shenandoah Valley was the largest wheat producing region in the United States.  In 1864 this cabin survived what historians call “The Burning”.  That’s when Union General Phillip Sheridan swept through the Valley burning the barns, mills and cabins to help end the American Civil War.  Within site of this cabin the Yankees burned down the original Swoope Mill which used water from Middle River for power.

My mother-in-law bought the log cabin last year and is now restoring it.  It’s got big logs with narrow chinking which is rare around here because most existing log cabins we’ve seen have little logs with wide chinking.
The log I held in my hands was part of a larger log that had to be taken out because it was infested with termites.  It was replaced by a new Oak log.  That old termite infested log served dutifully for 393 years.  It was with great reverence that I placed this ancient stalwart of the Earth on the fire where it would release the carbon it started sequestering in 1619.  We raised a glass in its honor and watched the release of 393 years of history. ©
Tags: Aldo LeopoldFireplaceOakSwoope almanac
5 Comments