Deny 401 Certification for the ACP

Deny 401 Certification for the ACP

The Virginia State Water Control Board must deny 401 certification for the Atlantic Coast Pipeline (ACP). It should have denied 401 certification for the Mountain Valley Pipeline (MVP). Building these fracked gas pipelines through steep, rough terrain and karst geology is fraught with danger. Construction is already causing massive soil erosion that pollutes our streams, rivers, wetlands, and eventually the Chesapeake Bay.

Dr. Ralph Northam said on the campaign trail to become Governor of Virginia, referring to the MVP being built by a corporation called EQT and the ACP being built by Dominion. Both are 42-inch diameter fracked gas pipelines planned to be built through West Virginia, Virginia, and North Carolina.

Governor Northam, it’s not being done right, and without the right steps forward from your administration, Virginia’s water resources and everyone in the path of these projects will remain at risk.

He also said he sent a letter to the Virginia Department of Environmental Quality (DEQ) requesting a stream by stream assessment of pipeline crossings instead of relying on a U.S. Army Corps of Engineers blanket permit. Listen to his words in this video. This is a campaign promise that has not been delivered.

We hear from Dominion, EQT, and the DEQ’s Director, David Paylor that these pipelines have been through the “most rigorous environmental review process in history.” If this is true then we have a flawed system. Various permits have been revoked by the courts. There are more lawsuits than I can count. Landslides, soil-covered roads, yards, and driveways, and repeated Notices of Violations are almost everyday occurrences. The Virginia DEQ has shut down the MVP because the state’s Erosion and Sediment Control standards are not adequate to handle the siltation from a project of this magnitude.

The pipeline builders, EQT and Dominion, are not “doing it right.”

I hear from the opposite side that these pipelines are safe. I’m not convinced.

There was an explosion of a newly constructed 32-inch pipeline just months ago in Moundsville, West Virginia that incinerated 11 acres of land. The Pittsburg Post-Gazette reported on the explosion on June 7, 2018. It was determined that the explosion was caused by a mudslide. 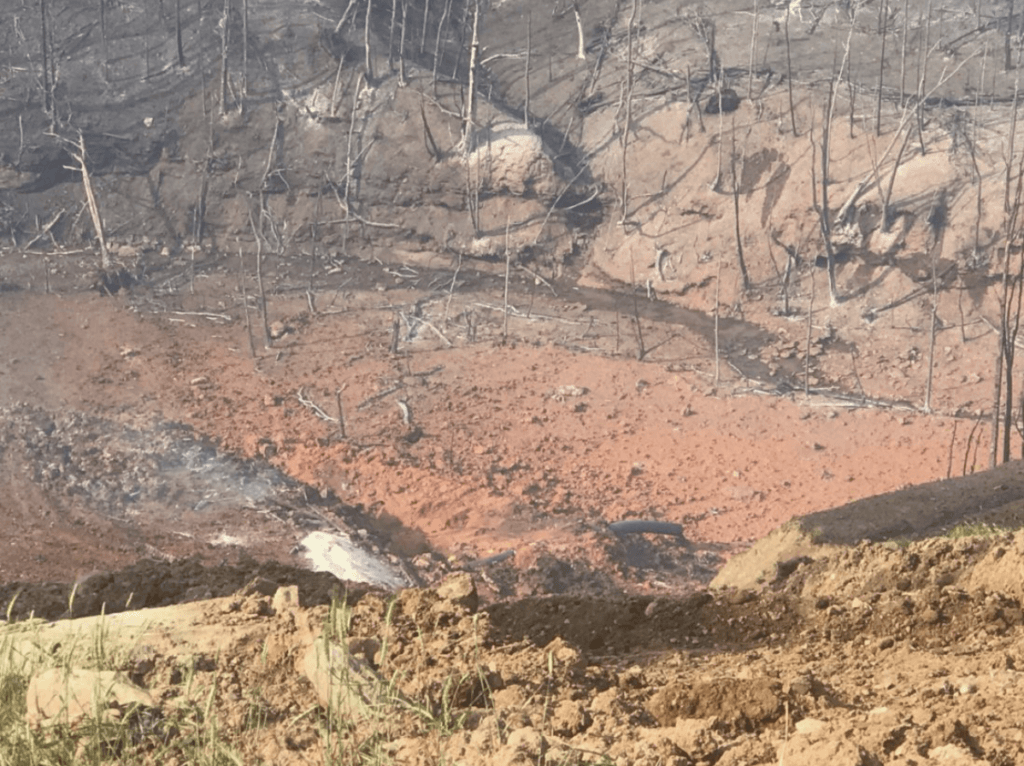 Drone photo published in the Intelligencer Wheeling News-Register on June 11 near Moundsville, WVA after the explosion. 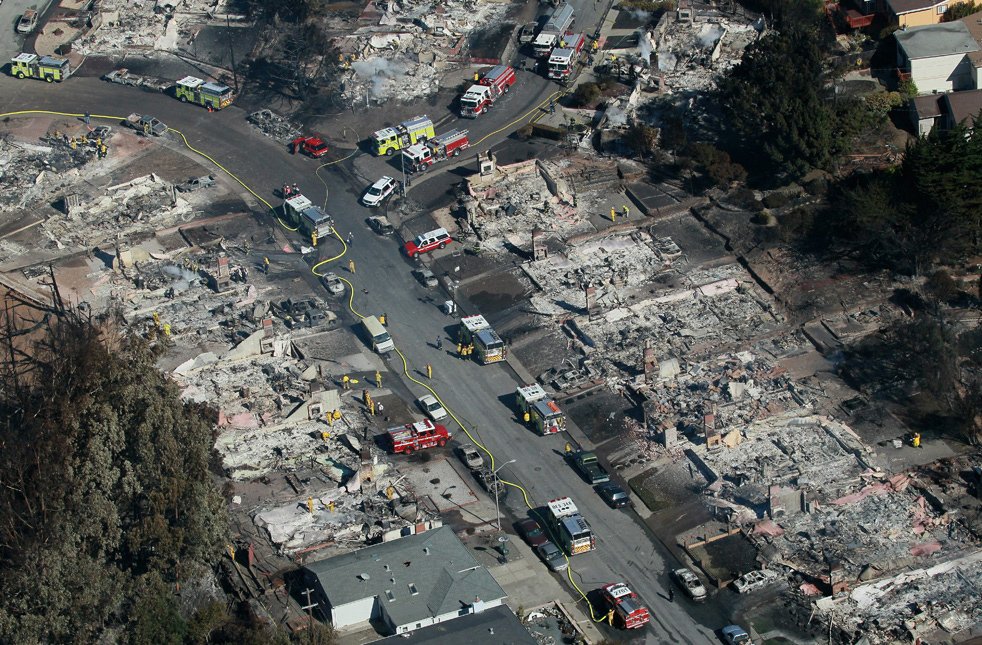 There were 297 significant incidents from pipeline accidents in 2017 according to the U.S. Department of Transportation’s Pipeline and Hazardous Materials Safety Administration. They define “significant” incident as any fatality or damage exceeding $50,000. There were eight fatalities and damages exceeding $200 million in 2017.

Just because EQT and Dominion keep saying pipelines are safe does not make me believe it.

I’ve taken their other talking point, that having a pipeline under or near your property will not lower its value, with a grain of salt as well.

I see the news reports. I see the pictures of soil erosion. We hear the voices of the people affected and run over by theses profiteering corporations. VDOT closed Cahas Mountain Road on May 20 in Franklin County because of mudslides caused by construction of the MVP. 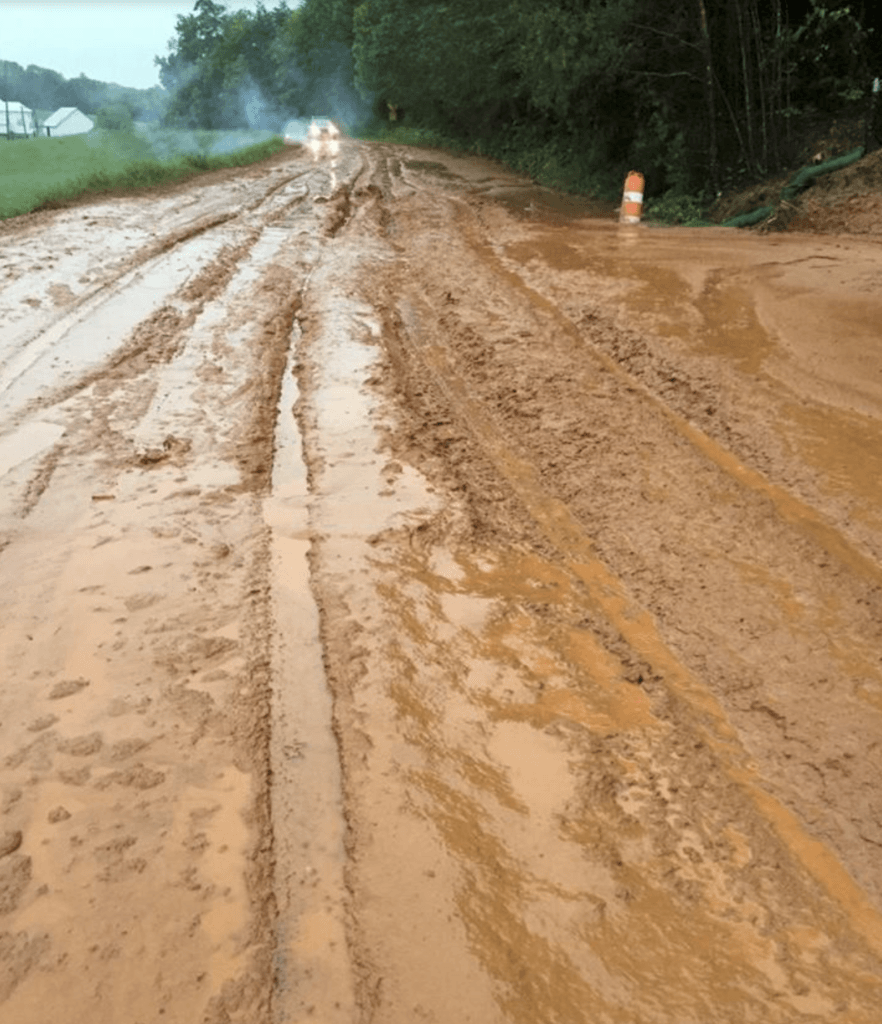 Cahas Mountain Road covered with sediment from the construction of the Mountain Valley Pipeline. Photo from 3WV and WINA.

The Chesapeake Bay Foundation, Southern Environmental Law Center, Appalachian Voices, Chesapeake Climate Action Network, Potomac Riverkeeper, and many other organizations concerned about sediment pollution in our streams filed a lawsuit in the U.S. Court of Appeals, Fourth Circuit Court on April 17, 2018 to appeal the Virginia SWCB’s decision to issue conditional 401 certification for the ACP.

“The Atlantic Coast Pipeline has the potential to damage Virginia waterways from the Allegheny Mountains to the Chesapeake Bay, so its construction and operation must be held to the strictest environmental standards possible. We have always maintained that the Water Control Board cannot have reasonable assurance that water quality will be protected unless it evaluates the adequacy of the pipeline company’s plans to prevent construction-caused erosion, dirty stormwater, and other impacts,” stated Jon Mueller, CBF Vice President for Litigation in a January 22 press release.

Blasting and Trenching Through Karst is Dangerous

Both planned pipelines are going to blast and trench through karst terrain. That is a type of active geology that causes sinkholes, solution channels, and caves. The ACP is planned to go through the widest and most active karst area in Virginia – Augusta County. This is not only dangerous for the pipeline and the gas it will carry but it will affect how groundwater behaves and most likely affect people’s drinking water.

MVP contractors were not supposed to cut trees after the beginning of the nesting season for migratory birds, yet they kept felling the trees, bird nests and all.

The ACP has conditional 401 certification from the Virginia State Water Control Board because they did not submit all the plans required by law and yet they proceeded to cut down trees along the path of the pipeline. They did not follow the Federal Energy Regulatory Commission’s instructions while cutting the trees. They were served a “Notice of Violation” because they cut trees too close to streams.

The Truth Is We Can’t Trust Them.

The sedimentation onto adjacent landscapes and into our streams during construction of these pipelines has been and will be, a constant quagmire of pollution and injustice. If these projects move forward, there will be unprecedented damage to our environment and a litany of lawsuits.

Below are my suggestions on how Governor Northam can “do it right” and avoid these very avoidable consequences.

First, he should halt all construction for the MVP and the ACP until a proper review has been completed by FERC as requested by Senator Tim Kaine and members of Congress from both parties. There are many studies that show that these pipelines are not needed.

Second, the administration should require the stream-by-stream, detailed construction plans for every stream and wetland crossing as promised. If Virginia’s State Water Control Board cannot conclude that these plans will ensure that state water quality standards will not be violated then it must deny 401 certification.

Dominion has a long history of disregard for the law. Dominion and EQT have multiple “Notices of Violations” from Virginia and West Virginia.

Based on Dominion’s track record for environmental stewardship I don’t believe for a moment that these pipelines can be built without violating our water quality standards and our rights.

Governor Northam, you and you alone can make this right. It’s time for your administration and its agencies to put the citizens of this Commonwealth – our health and safety – above the corporate interests putting us, and our environment, at risk.