How We Live With The River On Our Cattle Farm

How We Live With The River On Our Cattle Farm

This week’s flood prompted this post on how we deal with floodwater from our river with our cattle.  It was an out-of-bank flood event but it didn’t wash our cattle crossing out because we’ve learned to work with the river not against it. 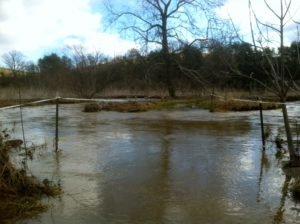 Poly-Tape electric fence set at high stage so flood water can pass under.

Middle River is a tributary of the South Fork of the Shenandoah River.  It bisects our farm in Augusta County, Virginia.  It’s the largest river in the county and it’s on the state’s “dirty waters” list for fecal coliform from cattle and lack of a “benthic” community.  Middle River is a TMDL stream – it’s polluted, mostly from cattle. 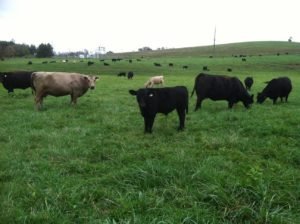 Some of the cows on our farm.

In order for Middle River to be de-listed as a TMDL stream and be restored, cattle have to be fenced out of it because they pollute the river with their feces and trample the stream banks with their hooves.  Their feces contain the fecal coliform that put the river on the list.   We know this from Antibiotic Resistance Analysis (ARA) testing.  In addition, cow manure adds nitrogen, phosphorous and other pathogens that not only pollute the water but can compromise bio-security for downstream livestock and humans. 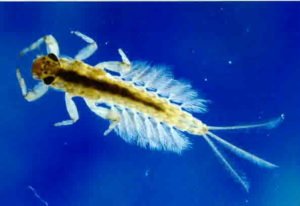 This Mayfly nymph lives in clean streams and has external gills. Sediment in Middle River clogs their gills and kills them.

The problem with fencing cattle out of the river is that the river floods, which can severely damage fences or take them out altogether.  We learned a long time ago that you couldn’t fight the river; it’s going to flood so you must work with it – not fight it.  The secret to long-lived riparian fences is to build them outside of the floodplain or put up inexpensive fences that effectively keep cattle out of the river.

We installed a single strand of barbwire in the floodplain, parallel to the river and charged it with solar power.  We get between 3,500 and 6,800 volts on the wire.

A single hot (electrified) barbwire works with our cattle.  We could have used smooth wire but for our cattle, it’s not as effective at keeping cattle out of the riparian area.  Sometimes floodwaters go over the top of the fence and the barbs collect debris.  It’s easy to walk along and just lift or shake the debris off. 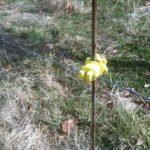 We did not want to use a more substantial fence because floodwaters would take it out which would cost a lot of money to replace and downtime.  We have not lost a single post or any line fences using this method.

At our river crossing, we put up a two-stage water gap with a single strand of electric poly-tape (illustrated above).  When the river level is normal or below we use the lower stage so cattle can cross and drink water from this access point.  When it’s going to flood or when we don’t have any cattle in that field we move the poly-tape to a higher position on the T-posts (as illustrated) so floodwater can pass under.

We also have this crossing rigged to breakaway should floodwaters bring enough force to rip it out. 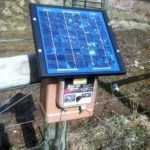 Virginia has a new program that reimburses farmers for the stream banks they fence out regardless of the type fence is up or how close it is to the bank.

There are many programs that can help farmers fence livestock out of streams and provide them with alternative watering systems.  In addition, cross-fencing can be put in to help facilitate rotational grazing, improve livestock movement and give them clean water to drink.  For more information send me an email or contact your local USDA Service Center or your local Soil and Water Conservation District.

Fencing cattle out of any stream will improve its water quality.  Once the cows are out a benthic community can survive.  All that manure that went downstream will be fertilizer for your pasture instead of pollution in the water.  There are other benefits of stream fencing as well, such as more stable stream banks and more wildlife habitat.  Cleaner streams in the headwaters of our Middle River help everyone downstream and will help restore the Chesapeake Bay.