Tree Shelters, Are They Worth It And If So When Should They Be Removed?

Home Chesapeake BayTree Shelters, Are They Worth It And If So When Should They Be Removed?

Tree Shelters, Are They Worth It And If So When Should They Be Removed? 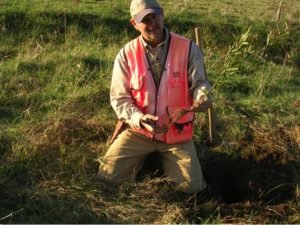 When converting grasslands to forest it has been a common practice to plant bare-root, hardwood tree seedlings directly into the sod.  Most recently tree shelters have been used to increase the growth rate and survival of hardwood (not pine) tree seedlings.  Shelters are recommended in Virginia’s Hardwood Tree Planting Guide. 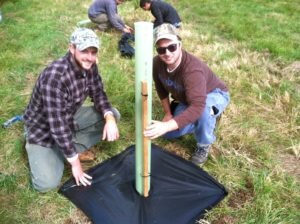 Many wonder, “are they worth it?”

Planting a tree seedling into a sea of grasses that houses armies of mice, voles, rabbits and deer without protection from a shelter is a recipe for failure.  It’s a harsh enough environment for the seedling because it’s being inserted into a grassland soil not a forest soil that has a much different microbial makeup.  In addition, most grasslands in the humid east are dominated by endophyte infected Tall Fescue which is a non-native grass that has allelopathic characteristics that can inhibit the growth of newly planted tree seedlings.

The Internet has a plethora of published research on the effectiveness of tree shelters, some negative but most of it supports the use of shelters.  From my experience with over half a million hardwoods I recommend shelters.  Deer repellents and wishful thinking don’t work nearly as well as shelters.

Tree shelters do more than just protect the seedling from deer, mice, voles and rabbits.  They act as a greenhouse, collecting light and warming the temperature inside the shelter for earlier growth in the spring and later growth in the fall.  Shelters act as markers, making the trees easier to see.  This allows quicker inspection and maintenance.  Being visible also prevents the tree from being mowed by a careless operator.

Research and experience tell us that shelters increase survival and growth in newly planted tree seedlings.

When should shelters be removed?

I have found that when the tree starts to unzip the tube or grow out of it – girth wise it is safe to take the tube off.  This is usually when the tree is about an inch and half to two inches in diameter at breast height.  But don’t throw the shelter away.  Use the inverted shelter as shown in the picture to prevent deer bucks from rubbing their antlers on the tree that can kill it.  Deer will not rub on trees 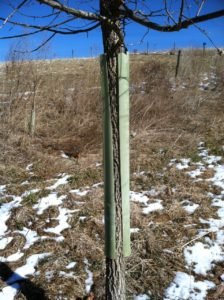 Click on this image to see a video of how to make an anti buck rub device from a tree shelter.

with an inverted shelter on it.

Maintenance of a newly planted forest is imperative for success.  Have you seen the bumper sticker, “A healthy forest does not happen by accident”?  Replacing broken stakes, taking shelters off the tree to weed and prune the seedling, replacing damaged shelters and removing bird nets when the seedling is almost out of the shelter are all important maintenance tasks necessary for quick canopy cover in the young forest.