Barefoot in South Africa – The Rhino War and Drought

Home BirdingBarefoot in South Africa – The Rhino War and Drought

Barefoot in South Africa – The Rhino War and Drought

The Princess of Swoope and I walked barefoot in South Africa.  Cape Town, Nelspruit, Kruger National Park, Ballito and the Drakensberg escarpment were on our itinerary that encompassed three UNESCO World Heritage Sites.  That means we took in some of the most spectacular and unique places on Earth.  First, Cape Town’s famous Table Mountain, then Saint Lucia Wetland Park – the largest estuary in the entire African continent and lastly the Drakensberg Escarpment (Dragon Mountains). 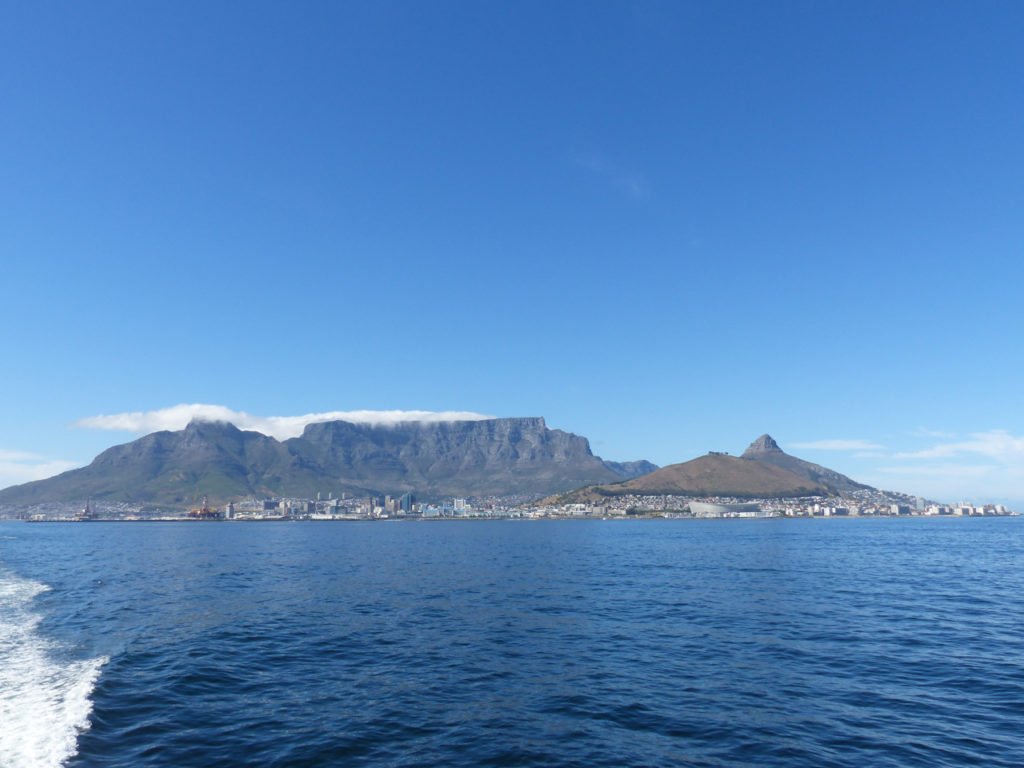 Table Mountain in the background, Cape Town in the foreground and Lion’s Head on the right.  Photo by R. Whitescarver

South Africa – the world in one nation

South Africa is the country at the very bottom of the African continent.  The Boer Wars, Apartheid, Nelson Mandela, diamonds, gold and “The Big Five” – are South African.  It is seven times the size of the whole Chesapeake Bay watershed.  It has 10% of the world’s gene pool.  For a birder like me, or “twitcher” as they call them in South Africa, it was paradise; they have over 900 species of birds.  They have eleven official languages, Zulu being the most spoken followed by Africaans then English. 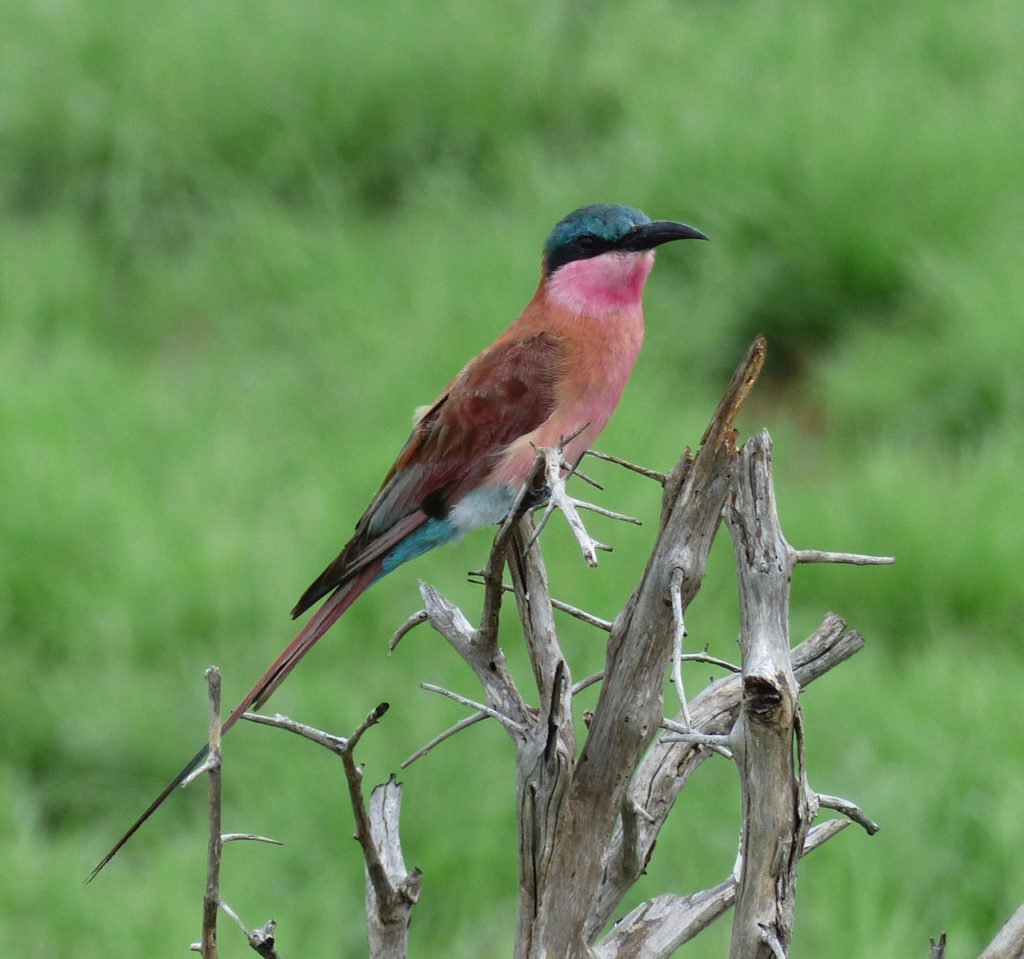 Tourism is huge – people mainly come here to see wildlife – as in “The Big Five”.  Wildlife is South Africa’s new gold and criminals are stealing it.  It’s called poaching; the illegal hunting, killing and stealing of wild animals.  Rhino horn on the black market is worth more per pound than gold, diamonds, and cocaine. 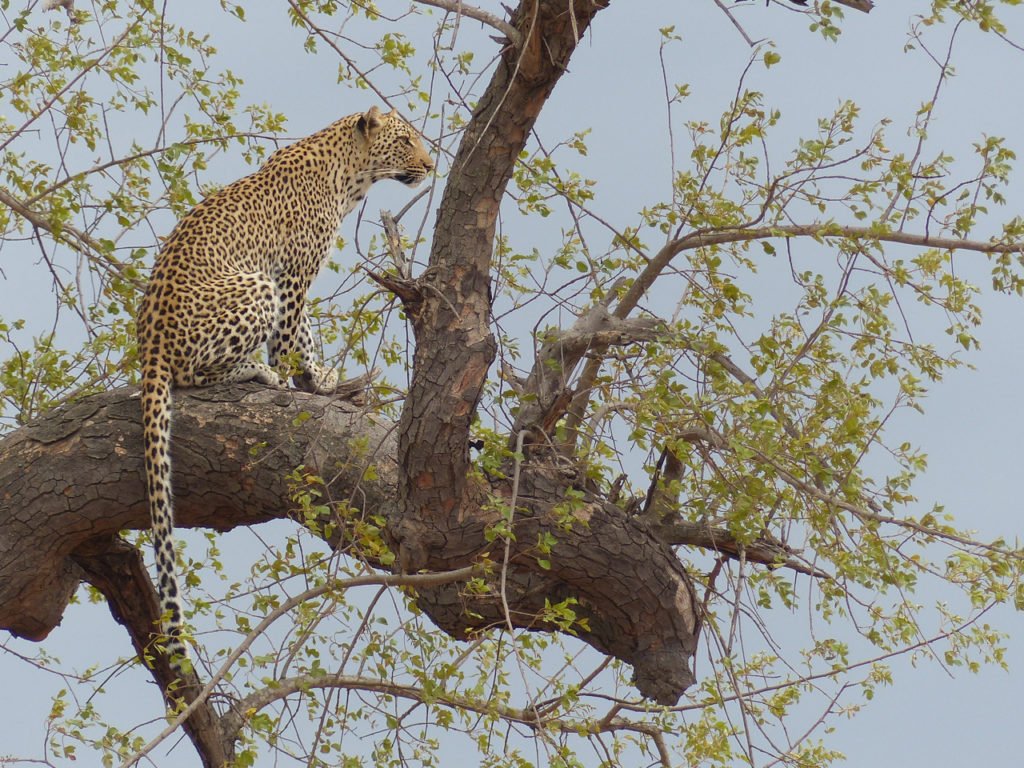 Leopard, one of the Big Five. Photo by Jeanne T Hoffman (Princess of Swoope) taken in Kruger National Park

South Africa is the epicenter of The Rhino War

In 2015 Kruger National Park lost over 900 White Rhinos to poachers; more than their birth rate.  Anti-poaching rangers and soldiers killed almost 200 poachers and arrested over 300.  It’s the Rhino War.

The Rhino has become the symbol of a much larger poaching crisis.  Poachers are killing Elephants for their tusks and Lions for their paws/bones.  Countless other species are being hunted illegally and killed also. 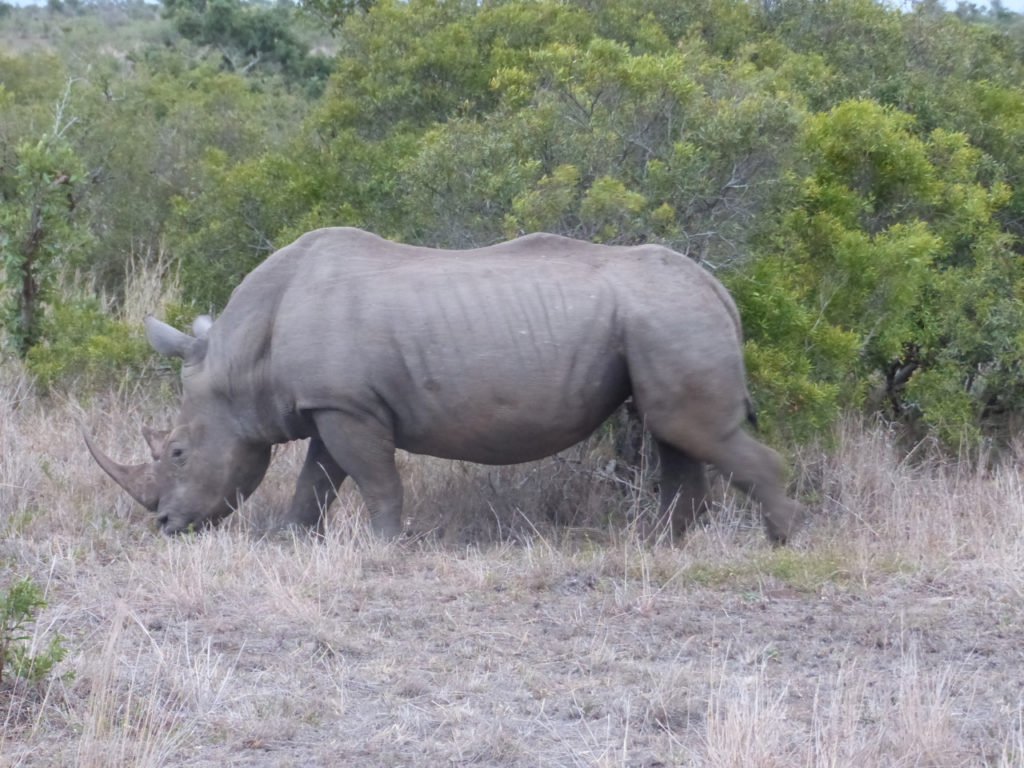 Jeanne and I recently spent a week in Kruger National Park with family. Our cousin is an anti-poaching ranger.  He told us that the South African vulture populations were down 60%.  Why?   Vulture behavior shows observant rangers immediately where a carcass is by their flight pattern.   Poachers poison the carcass to kill the scavengers especially the vultures; therefore giving the poachers more time to escape.  The bastards!

Want to help? Here’s a good organization – Unite Against Poaching.

South Africa is experiencing the worst drought in a century.

South Africa has only two seasons, Wet and Dry.  October through March is the  “wet season” and yet there has been little to no rain this year.  April through September is the “dry season” when there is historically no rain.  Grasses should be abundant and the veld should be in full bloom when we were visited.  There were no grasses whatsoever due to the lack of rain. Right now, Kruger National Park is literally a desert. 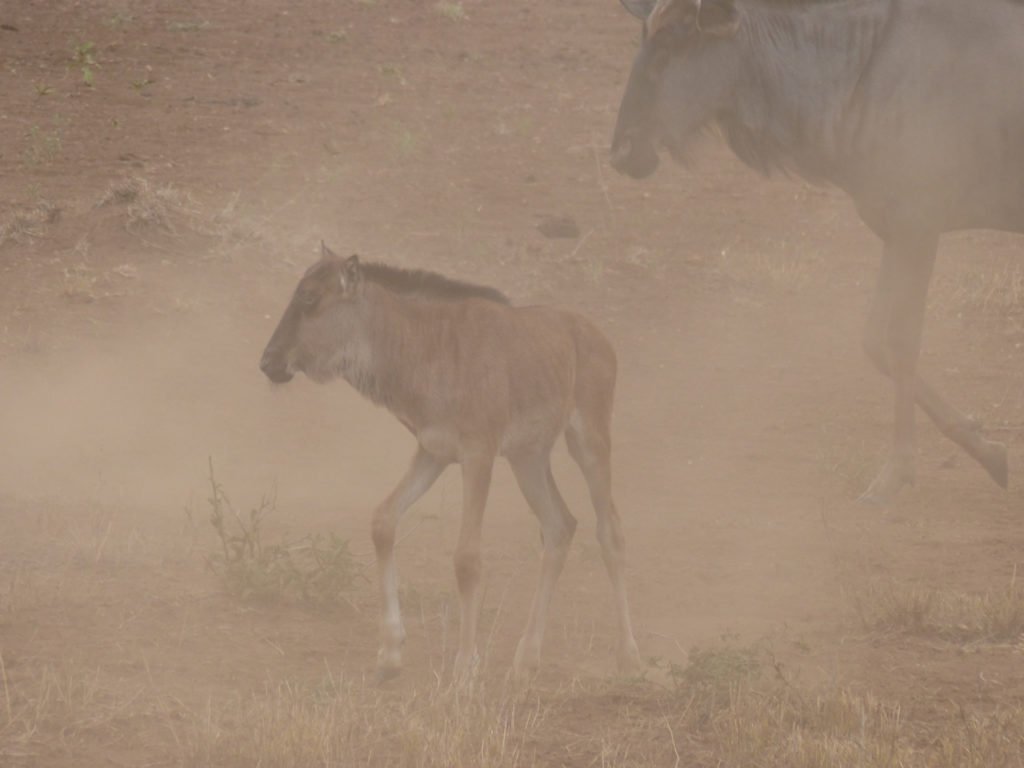 Blue Wildebeest newborn calf following his mother to water. Their movement stirs up the baked soil in Kruger. Photo by Jeanne T Hoffman.

Dust devils, wind-blown swirls of detached soil particles, rise up and dance across the dry lowveld.  I can see three, four, five of them in the distance. The only vegetation is the remaining leaves on scrubby shrubs and stunted trees. We see Impala, Kudus, Waterbucks and Giraffes picking leaves off the trees and warthogs on their knees eating the remaining stubs of dead grass pulling the plants up by the roots.

We drive by dry river beds and abandoned water holes. We watch elephants dig holes with their trunks and giant feet in the dry river beds until they find water. The holes are several feet deep and they drink and play in the muddy water. Once the Elephants get their fill of water the other thirsty animals come and take advantage of the holes. 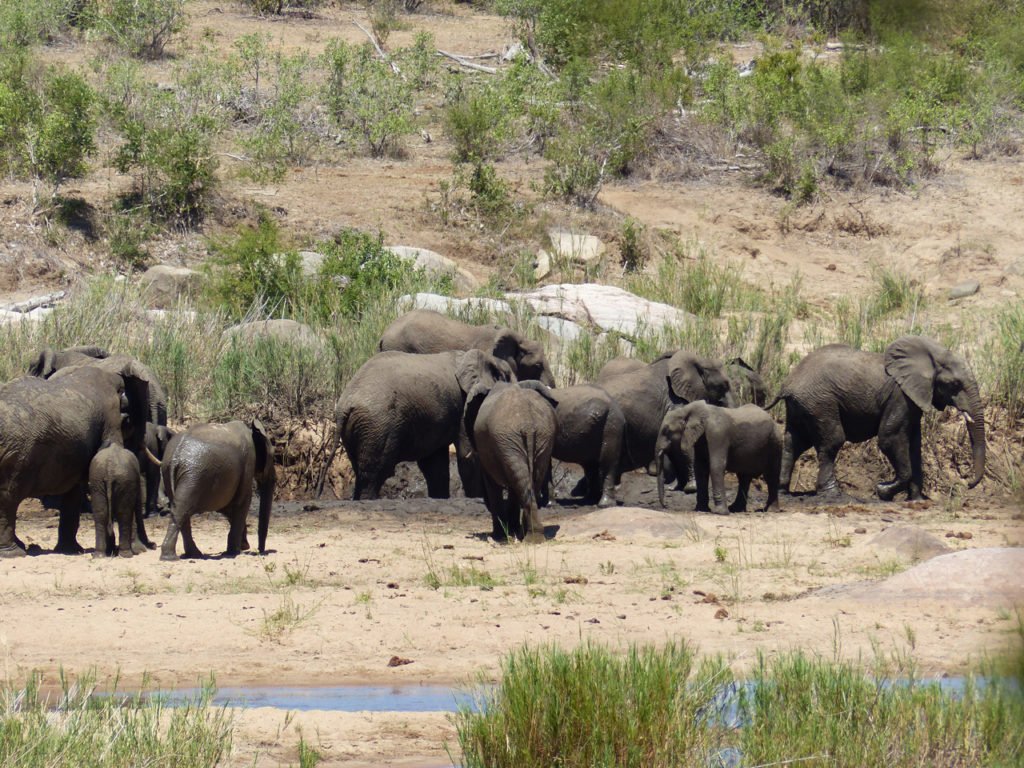 As we drove towards Skukuza Camp we saw rain falling from the dark clouds in the distance.  We could smell the rain.  Oh, what a beautiful sight and smell.  Fortunately, we drove right into it.  We stopped to feel it and hear it soaking into the parched earth.  I have heard it many times on our farm in Virginia.  If you stop and listen you can hear it.  The water goes straight into the wormholes and pushes the air out making a sound like a soft gurgling. The earth is drinking and is saying aaaahhhhhhhh.  To stop and listen to the sound of the land drinking is so soothing to both Earth and soul.  It’s like putting lotion on the ultra dry skin of God.  The animals were jubilant in the rain.  The plants, on the edge of death, began growing.  The gears of life’s cycles, at a standstill for lack of lubrication began to move. 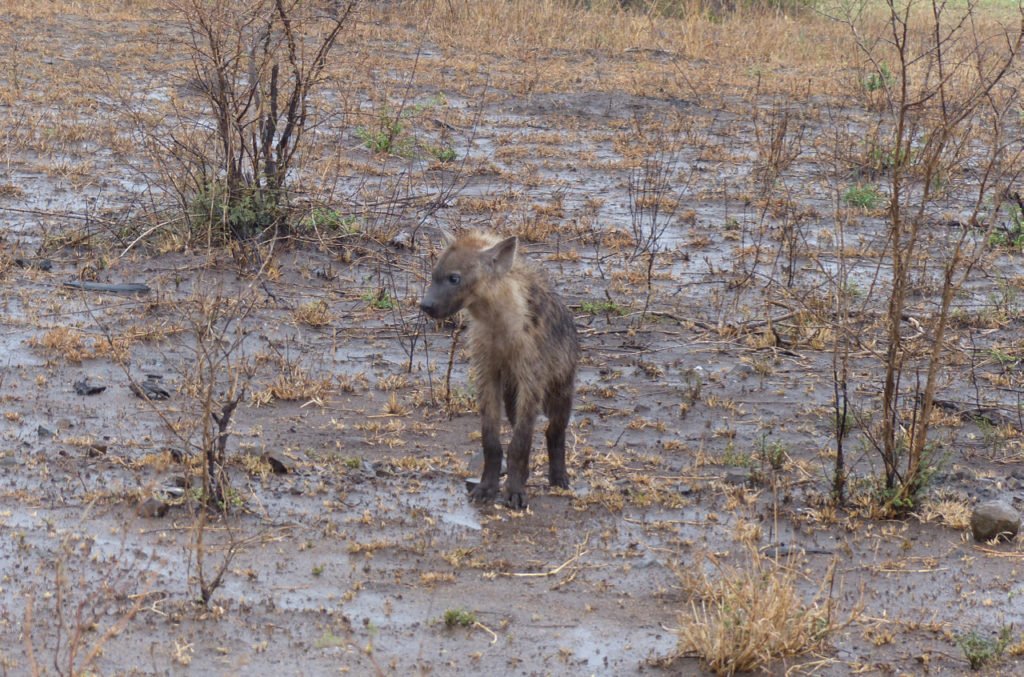 For exciting things to do in South Africa, visit this Bookmundi site.