This is a sifting of writings and ruminations for the year 2017: 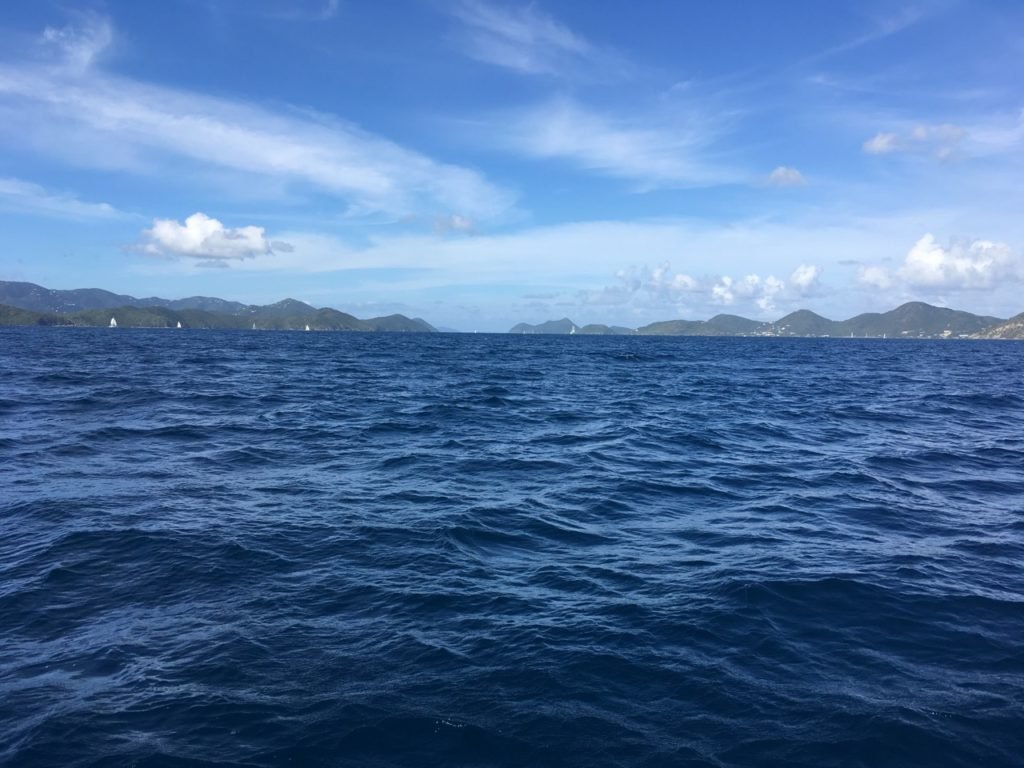 1/10: Great Harbour, Peter Island, British Virgin Islands: [Note: this journal entry was written just eight months before Hurricanes Irma and Maria devastated these and other islands in the Caribbean.]

The full moon’s shimmer on the water and the lights of Tortola and Road Town across the Sir Francis Drake Channel are in full view as I sit on the stern of our boat anchored in Great Harbor.

Those lights, symbolize a dream.  Freedom, courage, adventure.  We began the dream a couple of years ago.  To be able to sail in the Caribbean Sea, on our own, together, in love.  To see the deep, turquoise water and to be under power by only the wind is an awesome feeling.  Adventure of a lifetime.

Patrick Conway, on his evaluation of big cruise ships coming to Tortola.  He was our Airbnb host on the West End.

2/11: Hagerman National Wildlife Refuge (NWR), Texas:  Of Pelicans, pterodactyls, and petroleum. Colossal oil rig contraptions – they remind me of Pterodactyls – giant, winged, reptiles that roamed the Earth millions of years ago.  This reptile became extinct with all the other dinosaurs in the late Cretaceous Period some 70 million years ago which formed the massive crude oil deposits we now extract.

Hagerman NWR is home to much wildlife and the oil rigs that churn up the crude oil made from the decomposed dinosaurs.

Breathing in the irony of the moment – these oil rig Pterodactyls will become extinct in my daughter’s lifetime; hopefully extinguishing the carbon dioxide emissions from burning all this Cretaceous crude.

On one of the islands, we broke out a picnic of sandwiches, veggies and sauvignon blanc. 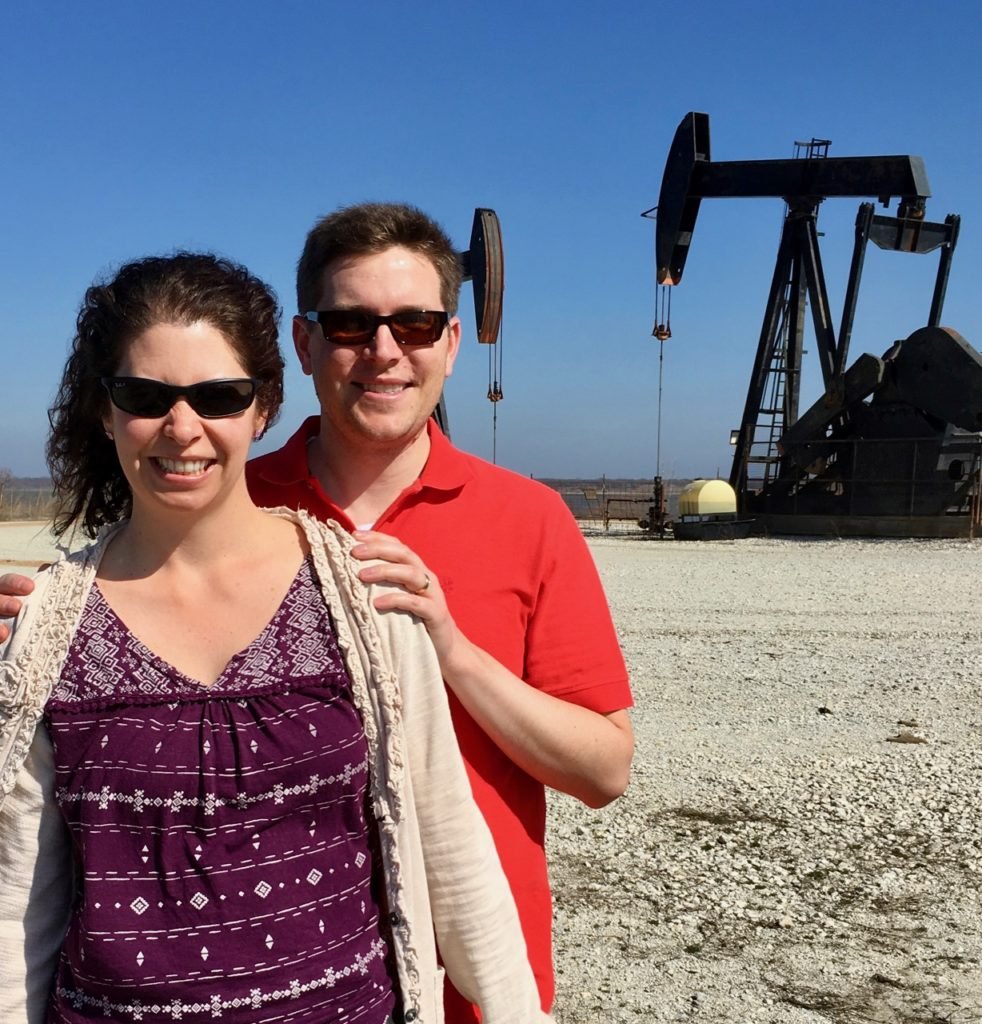 My daughter and son-in-law, Heather and Shane, on Hagerman NWR with the pterodactyl oil rigs.

It was a moment….

The oil rigs churning, a breeze, wide open expanses of wetlands and water…overhead a flock of big white birds with huge heads descended slowly without any motion, floating down onto a small spit of land three hundred yards in the distance…White Pelicans, they sort of look like Pterodactyls.

2/22: “How can the government allow a 42-inch pipeline to go through your backyard but not allow you to have a chicken?”

Jeanne Hoffman after an Augusta County Board of Supervisor’s meeting where banning fracked gas and backyard chickens were on the public hearings agenda.

2/24: If we can get a 30.6 percent reduction in E. coli in half a mile, think what a mile, five miles, a hundred miles could do. We have not yet recognized the great power of a healthy aquatic ecosystem to process in

stream pollution. It doesn’t matter if that pollution comes from a wastewater treatment plant, a malfunctioning septic field, or the back end of a cow.

The bottom line is we can cut a lot of pollution if we just plant more trees along streams.

3/2: This afternoon, I picked up our friend, Dr. H. Bruce Rinker at his home to bring him out to the farm for several hours.  We rode through the herds of cattle to see the newborns and make sure they were okay.  As we were riding through a pasture he asked me, “Do you think of this as a chore every day or do you see it as a wonder every day?”

It made me appreciate, once again, how lucky I am to be here and to be with Jeanne, the most remarkable woman I have ever known; hard-working, intelligent, caring, and so beautiful.  Her leadership and love for the animals make the farm successful and such a joy to be in.

I don’t consider our work here on the farm as “work”.  It is our life, and I feel so lucky to be, in it.  There are things that just amaze me every day like the birth of a calf in cold weather, seeing a clutch of Killdeer scuttling from us as we drive the truck through the pasture with hay or just looking at Jeanne in her farm clothes and pearl earrings.

Jeanne calling the cows; now that’s very special.  I so enjoy her calling the cows, every single day.  And I enjoy seeing Val’s tail fluffed up when he is excited.  Val is our two-year-old Border Collie.  His tail looks like a white pom-pom on top of his body.

Here are a few things that I love:

A Bald Eagle perched on a snag,

Heat from the wood stove

The smell of good hay

Cows jumping up and down at good hay

The kind eye of a horse

A newborn calf finding his mother

My grandson hitting upside down pots with spoons

Tomatoes on the vine

Fresh corn on the cob with butter and salt

Jeanne gathering flowers to give away

Hummingbirds gathering nectar from Jewelweed at our river

Mayflies hatching over a clean stream

A full sail on a broad reach

The smell of rich soil

Being with my kids 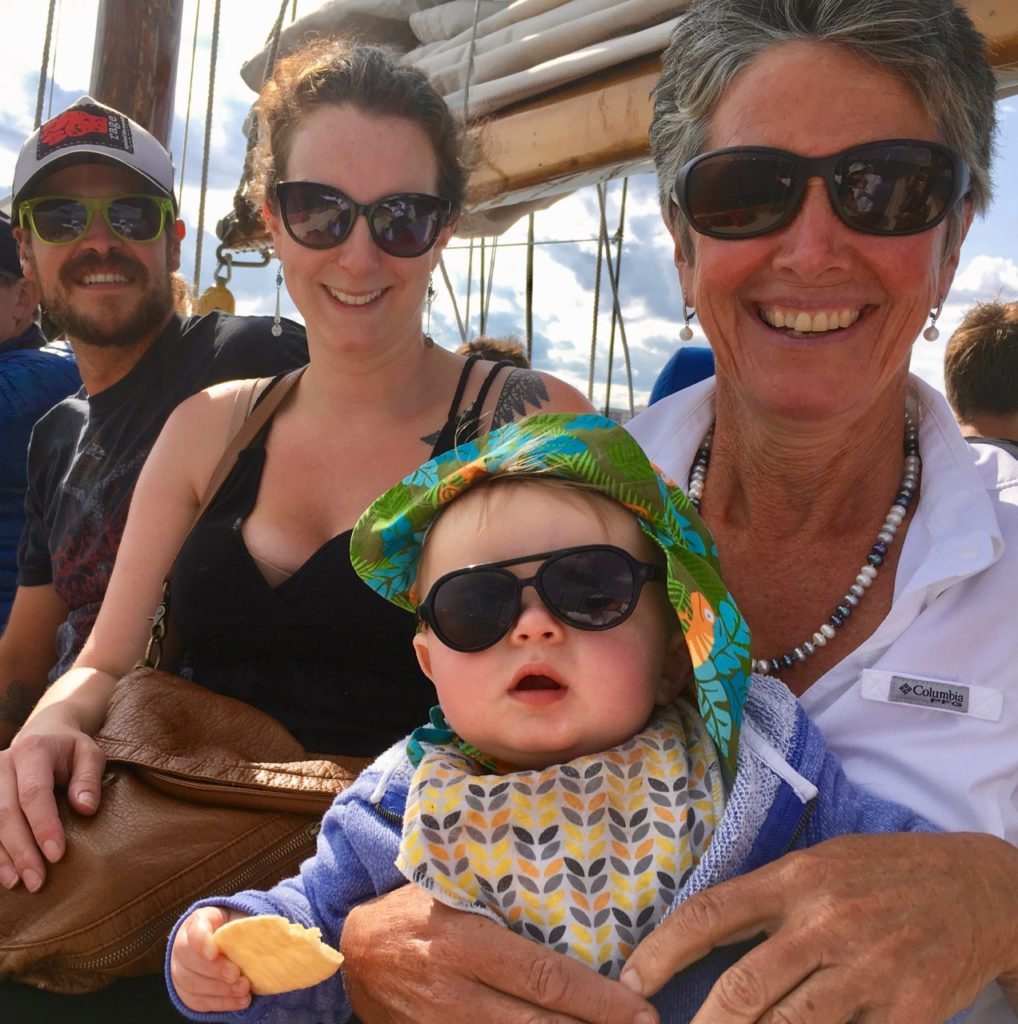 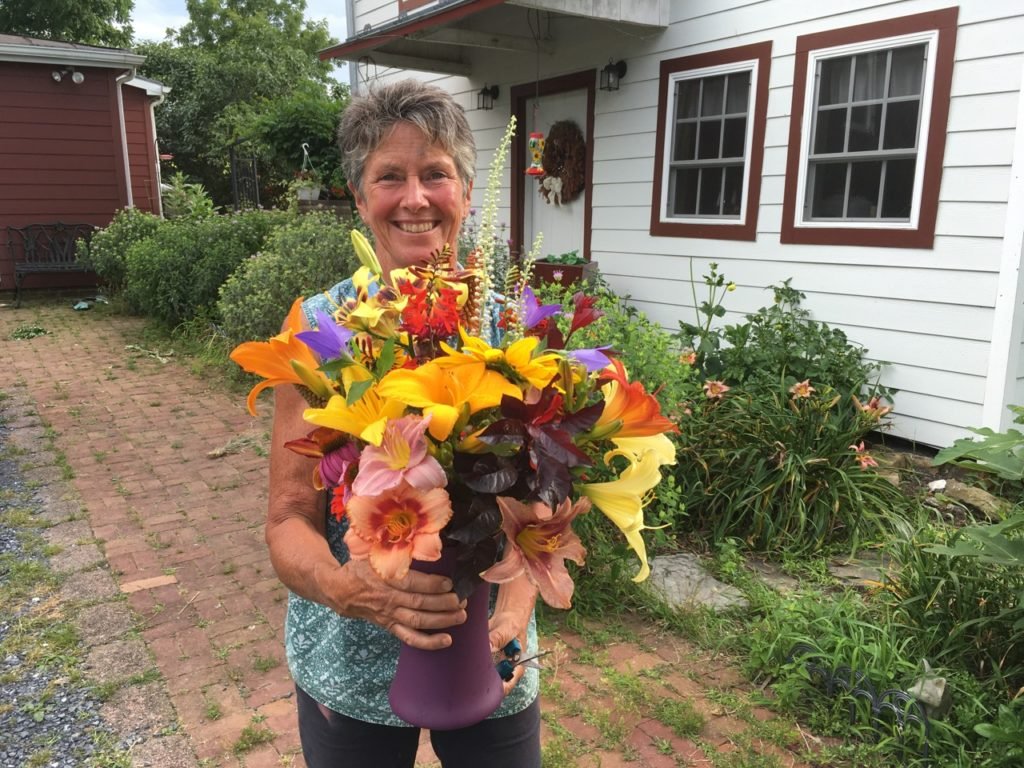 Jeanne picked all these flowers from the gardens of Meadowview and will give to a friend.

3/5: Good morning.  One of the stream exclusion jobs I have been working on for years…yes, years…will come to fruition, I hope soon.  Reflecting on what has taken so long…first, the bureaucracy of FSA, NRCS and Congress’ failure to pass a farm bill on time.  Second, parental, old-school advice and the fear of failure, and lastly, that inhibition, or lack of confidence, that keeps us from taking that final step through the door of opportunity.

My client’s first call to start the process of fencing her neighbor’s cattle out of her streams and wetlands was to the CBF Richmond office.  Libby Norris dispatched me to investigate.  I’ve been shepherding this project ever since.  My point in this communication is that many of our successes take a long time and we should never forget that service, staying in touch, and building a relationship with customers is very important.

3/19: Green grass emerges from its brown, dormant cloak of winter. Northern Harriers glide and teeter, close to the ground in search of anything that moves. In the vast grasslands of Swoope, Virginia, the headwaters of the Shenandoah River it’s voles they hunt. American Plum pushes forth its white blooms, and the metallic-blue, white-bellied, male Tree Swallows arrive to guard nesting sites for their lifetime mates. This is March, the beginning of calving season on our beef cattle farm.

4/24: On average, a mature cow weights half a ton.  Think about a herd of fifty, half-ton cows with hooves like big ice cream scoops climbing up and down a stream bank.  The soil ripped out by their hooves gets in the stream and suffocates the critters that live in it.  If there are cows in the stream, the water is going to be brown – like chocolate milk, because of all the dislodged soil suspended in the water. 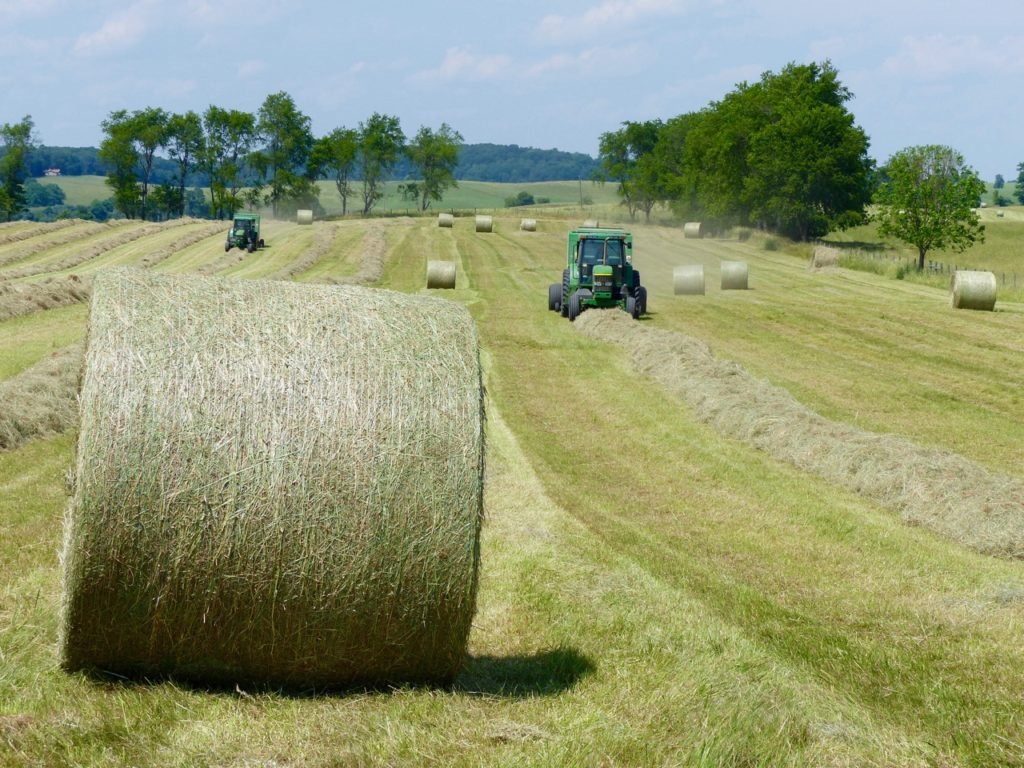 6/16: June is when we harvest carbon – the carbon sequestered by the grasses we cut for hay. It’s amazing – a cow digesting grass. We cut the grasses in our hay fields, let it dry then bale it into half-ton round bales that we’ll feed this winter when the pastures are dormant. I love the smell of hay. For some odd reason, I love putting it up. It’s a wonderful feeling; knowing you have food for the cows for the entire winter. I like to think of making hay as baling sunshine.  After all, sunlight and green plants make it possible for us to make hay and for all humanity to live.

8/16: Dominion’s Atlantic Coast Pipeline (ACP), if allowed to be built, will be the largest disturbance of land and water in the Commonwealth of Virginia since the Interstate highways were built. Is it possible or even probable that Dominion can dig up a 600-mile-long, ten-foot-deep, 125-foot-wide swath through three states, crossing hundreds of streams and meet each state’s water quality standards? I do not believe it is possible nor probable.

From “Mayhem of Construction”

10/18: But there are now torpedoes of ignorance, greed, and science denial in the water – launched by the Trump administration, and aimed at the fundamental environmental laws that have gotten us so far.   I gnash my teeth.  They want to “water down” the definition of “Waters of the United States” so that polluters can get away with it and thereby increase their profit margins.  They want to zero out funding for the Chesapeake Bay Program and for clean water initiatives everywhere and seek to discredit scientists and hide or destroy their research.

I say damn the torpedoes, full speed ahead.  We – and every last one of us – need to tell our representatives in Washington that clean water is vital to our future as a country, and they must continue to fully fund clean water initiatives.

From “Torpedoes, Trump and the Clean Water Act at 45”

10/19: A line in a great song, “there’s only two things that money can’t buy, and that’s true love and homegrown tomatoes?”

When the Virginia Outdoor Foundation accepted Dominion’s $4M to build their pipeline through 11 “eased” farms, they sold their soul and our trust. They betrayed the trust of every landowner that donated their development rights to them since 1968 and all future donors. Those people gave them over 800,000 acres of development rights to defend.

Dominion Energy wants to build a 42-inch high pressure fracked gas pipeline through West Virginia, Virginia and North Carolina. Their current, planned route goes through 11 “eased” farms in Virginia. On Monday (16th of October) the VOF granted Dominion Energy their “swap” of three parcels of land and blood money for the right to dig through these 11 farms.

VOF was in a tight spot. When FERC approved the Atlantic Coast Pipeline, it gave them the green light to use eminent domain. So, Dominion Energy was going to “take” the land either way. Seemingly, there were two choices:

They forgot about the value of trust. The trust every easement donor had and the trust that can never be regained for the future of open-space protection.

“The Chesapeake Clean Water Blueprint is working. Bay grasses are up, the dead zone is getting smaller, and oysters are beginning to rebound.” 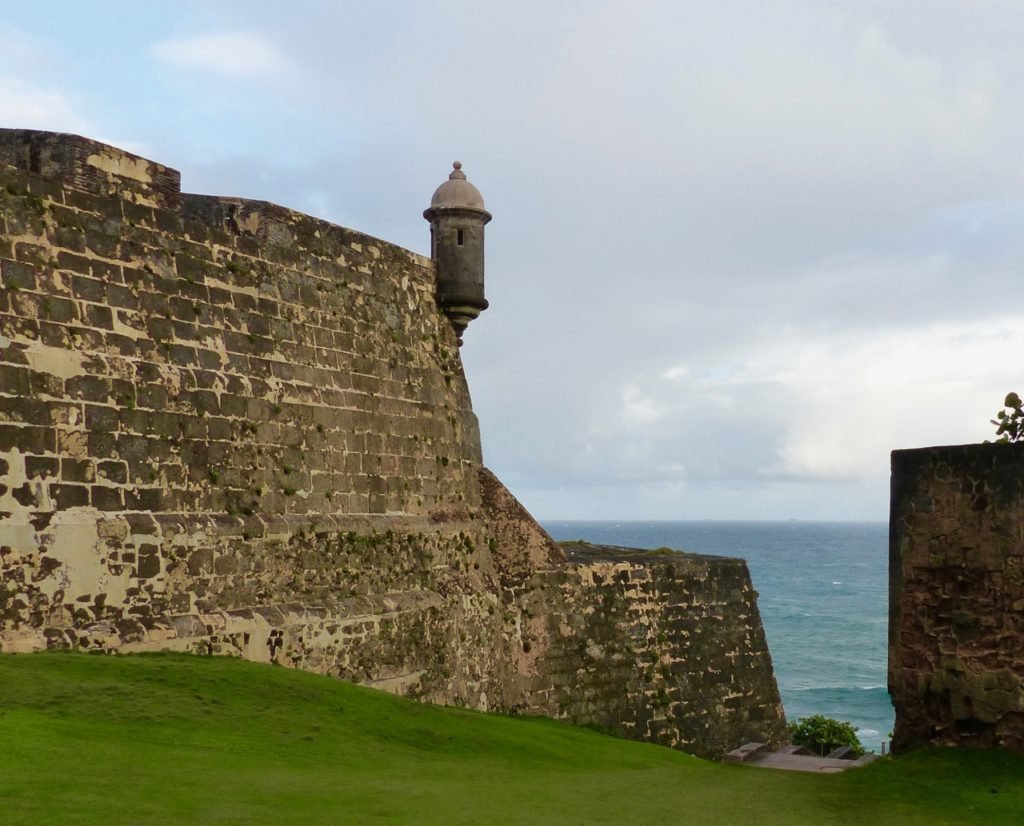 11/27: Construction of the citadel of El Morro, in Old San Juan, Puerto Rico began in 1539. It guards the entrance to the first fresh water supply in the Western Hemisphere for ships traveling from the East. It’s a UNESCO World Heritage Site. Jeanne and I walked the halls and roads of this fortress of protection in December of 2016. Hurricanes Irma and Maria in September of October of 2017 devastated the Island but not this fortress which has endured for over four and a half centuries. The people of Puerto Rico stand as strong as this fortress despite the lack of support from the Trump administration. Our President, throwing paper towels at a crowd of people without water to drink was an embarrassing publicity stunt.

My first Native American name, bestowed upon me by the Princess of Swoope on 3/7/2017.