Are You a “Home Rule” Public Servant or a “Dillon’s Rule” Bureaucrat?

Are You a “Home Rule” Public Servant or a “Dillon’s Rule” Bureaucrat?

Note: This post is expressly written for public servants.

I spent 31 years in public service.  Yes, I was a bureaucrat.  Just the mention of the “B” word makes a lot of people cringe – included myself.  Many people and most politicians think of bureaucrats as lazy government employees on the public dole with too many benefits.  We were often the “waste” in government that had to be cut.

I spent my whole career trying to change that image.

I worked hard and believed that somehow I could change the world for the betterment of mankind.  I believe everyone in public service wants to do this but somehow worker behavior isn’t always perceived that way.

Do you remember “Home Rule” and “Dillon’s Rule” from high school civics?  It refers to how much leeway state governments give to localities.  Virginia has long been known as a strict “Dillon’s Rule” state, which means localities are only allowed to do what is expressly stated in the law.  Additionally, if nothing is stated in the statutes about what the locality intends to do, it cannot do that either without seeking permission.

“Home Rule” is just the opposite.  If the statutes don’t say anything about what it is the locality is trying to accomplish then they are free to do it.

Although public servants are not subject to “Dillon’s Rule” and “home rule” law like localities are, they are often faced with situations where there are no clear guidelines on how to proceed.  The public servant has to choose which course of action to take.  “Home Rule” public servants will assume they can proceed.  The “Dillon’s Rule” bureaucrat will assume they cannot proceed and stop.  How many times have you heard, “Well, the book doesn’t say anything about that so I guess we can’t do it”?

I ran into this often while carrying out my duties as a public servant.  One of the “Best Management Practices” (BMP’s) we pursued was “stream fencing” to help farmers fence their livestock out of their streams to improve water quality and livestock health. 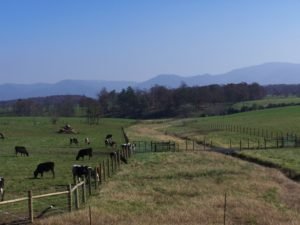 In my office, I was very fortunate because we had a “Home Rule” Team.  We used creativity to mix and match the various programs to make the programs work for the farmer.  That’s how we managed to fence livestock out of hundreds of miles of stream banks; if the guidance documents didn’t say anything about what we were trying to do we assumed we could…and we did.

Don’t get me wrong, guidance is good and we need it but if there is no or limited guidance then use your best judgment in tandem with your technical expertise – and go forward.

The “Dillon Rule” bureaucrat may be denying opportunity to potential clients simply because there is no guidance.  In contrast, The “Home Rule” public servant says, “I’m knocking on that door of opportunity.”

Our mission in soil and water conservation is crystal clear: get BMP’s installed on the land.  What may not be so clear is how to get the BMP that works for the land to also work for the client.  The “Home Rule” public servant will find a way, while the “Dillon Rule” bureaucrat abandons the way.

Which one are you?