The Princess of Swoope Goes to DC to See President Obama

The Princess of Swoope Goes to DC to See President Obama

Jeanne, the Princess of Swoope and I had the privilege of attending the League of Conservation Voters annual Capital Dinner on June 25th.  It was held in the Ronald Reagan Building and International Trade Center in the nation’s capital.  We were there 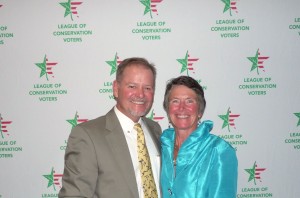 I got to escort the Princess of Swoope across the green carpet at the Ronald Reagan Center and International Trade Center.with the . President Obama and Senator Tim Kane were keynote speakers.  There were over 800 people in attendance dressed for an evening of inspiration and fun.  Jeanne wore her “princess” outfit.  It has a turquoise, high collar blouse and silky black pants.  She wore a necklace with a big golden starfish on it and when she went through the two security check points it set off the alarms both times, prompting secret service agents to swarm around her with their metal detectors – part of the magic of the evening.

with the Virginia delegation. President Obama and Senator Tim Kane were keynote speakers.  There were over 800 people in attendance dressed for an evening of inspiration and fun.  Jeanne wore her “princess” outfit.  It has a turquoise, high collar blouse and silky black pants.  She wore a necklace with a big golden starfish on it and when she went through the two security check points it set off the alarms both times, prompting secret service agents to swarm around her with their metal detectors – part of the magic of the evening.

There was a walkway with green carpet (as opposed to red) and a wall of logos for picture taking.  I was looking for the “Fashion Police” but didn’t see them.  They would have had a “hay day” with us because we were the only people not in black and white. 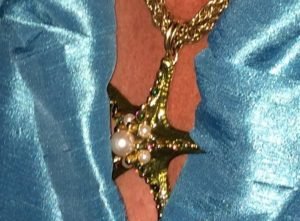 Jeanne’s princess necklace that set off the security alarms.

Once we got through the two security check points and registration we headed for the room where the President would speak.  Our friend Roy Hoagland joined us and we secured a spot directly behind the red rope.  It was like being on the fifty yard line in row A at a football game.  Roy went to get us drinks from the open bar.  There we were in front of the podium with the presidential seal and a huge American flag behind it.  We knew then it was really going to happen.

By the time the speeches began the place was packed and we were standing shoulder to shoulder with the movers and shakers of the conservation world. 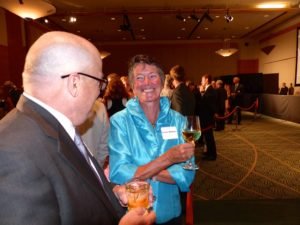 Roy Hoagland and Jeanne await the arrival of the President.

It was a magical night filled with some of the most influential environmental people in the world.  The many reporters there chose to focus on President Obama’s lighthearted jabs at the science and climate change deniers instead of the success of what’s going on in the real world or Jeanne’s outfit.

Here’s the main jab that they chose to report:

“It’s pretty rare that you encounter people who say that the problem of carbon pollution is not a problem. You’ve all — in most communities and work places, et cetera, when you talk to folks, they may not know how big a problem, they may not know exactly how it works, they may doubt that we can do something about it, but generally they don’t just say, no, I don’t believe anything scientists say. (Laughter.) Except where?

THE PRESIDENT: “In Congress. (Laughter.) In Congress. Folks will tell you climate change is a hoax or a fad or a plot. (Laughter.) It’s a liberal plot. (Laughter.) And then most recently, because many who say that actually know better and they’re just embarrassed, they duck the question. They say, hey, I’m not a scientist, which really translates into, I accept that manmade climate change is real, but if I say so out loud, I will be run out of town by a bunch of fringe elements that thinks climate science is a liberal plot so I’m going to just pretend like, I don’t know, I can’t read”. (Applause.) 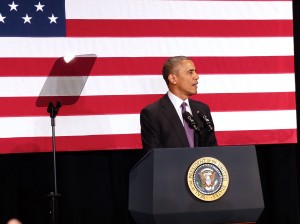 President Barrack Obama addressing the League of Conservation Voters at the Reagan Center. Click on this image to see the video of the whole speech.

The President talked about twenty minutes about the real environmental issues, the science and how America is moving forward to solve these issues.  Most of the media left this out so I’m brining it to you here.  Here are some excerpts of what he said:

“Right now, America generates more clean energy than ever before. Thanks in part to the investments we made in the Recovery Act. (Applause.) Remember that old Recovery Act? (Laughter.) It was the largest investment in green energy and technology in U.S. history — that was just one of its attributes”.

“As a consequence of those investments, the electricity we generate from wind has tripled since 2008. (Applause.) The energy we generate from the sun, has increased more than tenfold. (Applause.) Every four minutes, another American home or business goes solar. And last year alone, solar jobs jumped 20 percent”.

“Since I took office, we’ve doubled how far our cars and trucks will go on a gallon of gas by the middle of the next decade”.

“Today, about 40 percent of America’s carbon pollution comes from our power plants. There are no federal limits to the amount those plants can pump into the air. None. We limit the amount of toxic chemicals like mercury, and sulfur, and arsenic in our air and water, but power plants can dump as much carbon pollution into our atmosphere as they want. It’s not smart, it’s not right, it’s not safe, and I determined it needs to stop”.

You can see the video of the whole speech by clicking on the image of President Obama above.  Or to see the full text click here.

The Virginia League of Conservation Voters won the “John Hunting Winning for the Environment Award”.  It was accepted by our new Executive Director Mike Town and former Director Jeff Painter.  Thank you for a fabulous evening! 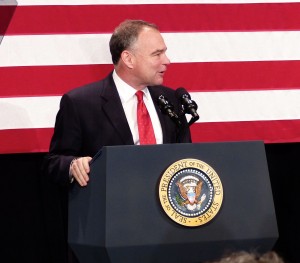 Senator Tim Kane addresses the League of Conservation Voters at the Reagan Center. 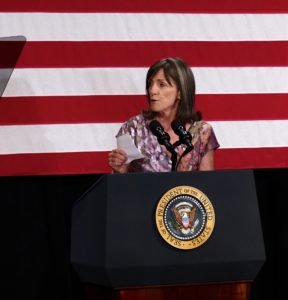 Carol Browner, chair of the board of directors of the League of Conservation Voters and former EPA Administrator, introducing the President of the United States.