Note: The text from most of this post was published as an op-ed piece in the News-Leader on 7/17/20. 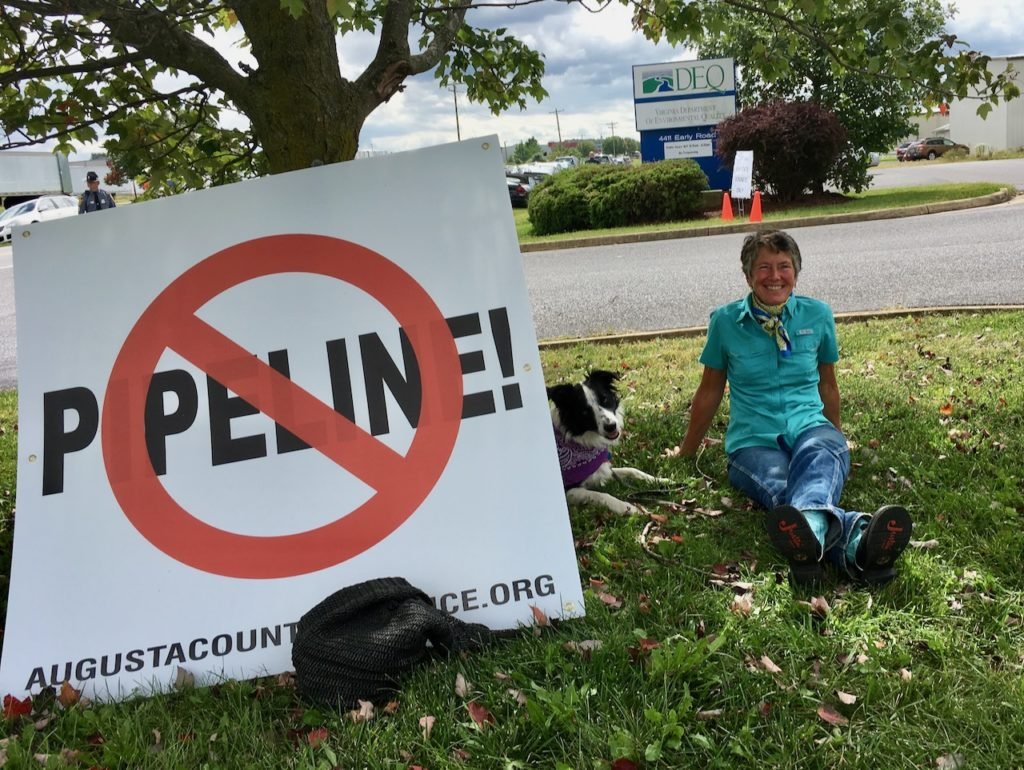 My wife, Jeanne Hoffman, and Val at an anti-pipeline rally at the DEQ headquarters in Harrisonburg, Virginia, on September 14, 2017. Photo credit R. Whitescarver.

A Six-Year Fight Against Dominion

Celebrate the victory—the defeat of Dominion Energy’s Atlantic Coast Pipeline (ACP), a 600-mile, high-pressure, fracked-gas pipeline planned to rip through West Virginia, Virginia, and North Carolina. It was a six-year fight for people’s land rights, our water, environmental justice, and common decency. We defeated more than just a pipeline, we defeated the mendacious, well-funded fossil fuel lobby and their government allies, namely Virginia Governors Terry McAuliffe and Ralph Northam and the leadership at the very top of the Virginia Department of Environmental Quality (DEQ).

I often heard, “It’s a done deal, you will never win.” I never, ever lost hope and knew from the core of my being that somehow, we would win.

For sure, this victory could not have happened without the persistent, thorough, and ever-vigilant legal teams working for its demise, but what brought about the tsunami of opposition from thousands of common people like me? Our abhorrence of the pipeline goes much deeper than just the environmental and eminent domain issues. 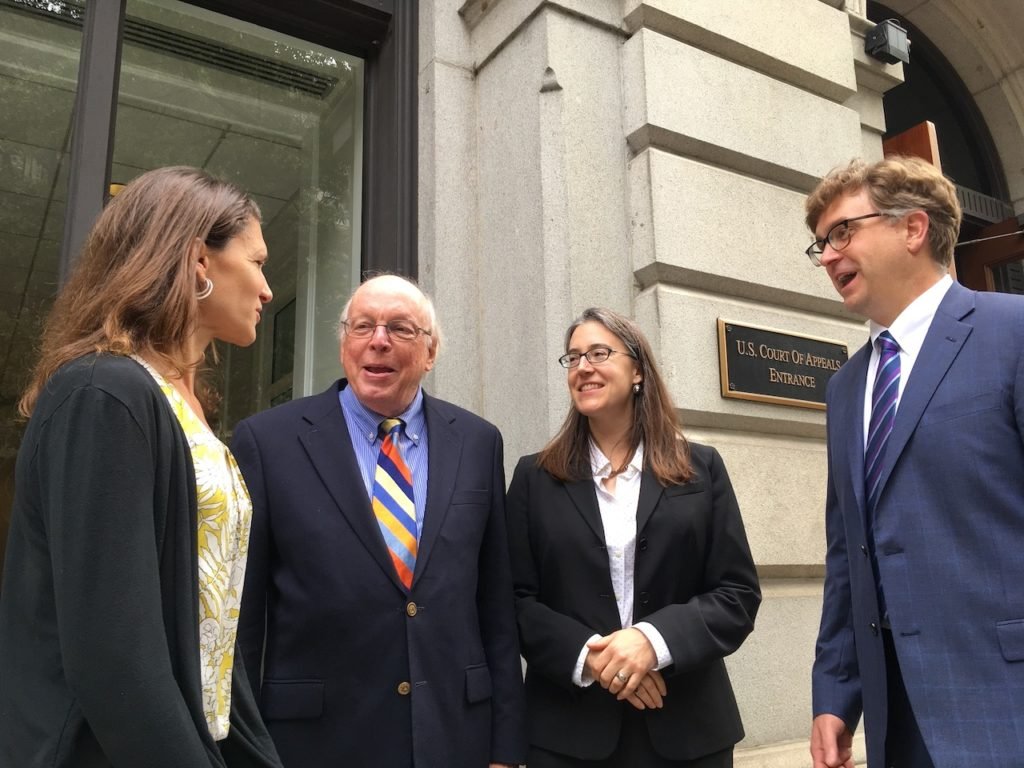 More Than the Environment

It was easy for me to enter the fight. At first, it was because the pipeline was going to damage our streams and take people’s property against their will for corporate profit. And why did we need more fossil-fuel infrastructure when what we really need is a global, warlike effort to use renewable energy to stabilize climate change? Those were worthy enough causes to get in the fight, but what galvanized my resolve was how Dominion Energy, the builder of the pipeline, treated people—with disrespect, and bullying. My first galvanization happened the night of our only local Federal Energy Regulatory Commission (FERC) hearing on March 19, 2015.

The meeting was strictly timed: a two-hour meeting with only three minutes for each speaker. It was FERC’s chance to hear from the people in Augusta County, whose land would be taken and whose streams would be damaged by the mayhem of constructing what would be the largest and most expensive fracked-gas pipeline in Virginia’s history. Dominion took advantage of us. They slam-dunked us. And that made me grit-my-teeth-mad and put me in the fight forever until the end. 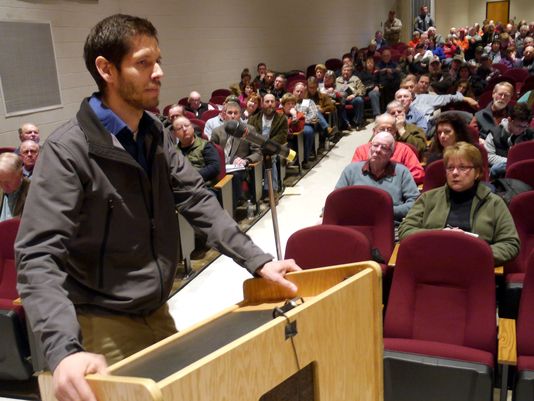 Augusta County resident John Geary, who owns a farm that is on the proposed route for Dominion’s Atlantic Coast Pipeline, speaks about his concerns on March 19, 2015, at the FERC scoping meeting at Stuarts Draft High School. Photo credit Randall K. Wolf/The News Leader.

My neighbor and I arrived two and a half hours early to stand in line to get our chance to speak for three minutes. I’ll never forget the well-dressed young woman with the clipboard greeting only some people as they arrived at Stuarts Draft Middle School. “Who is she?” I thought, and “Should we check in with her?” Some of the people she checked in were escorted inside to a special room and some were placed in line. What was going on?

Dominion’s clipboard lady was making sure the company had plenty of people speaking in favor of the pipeline. Dominion brought in so many people that many of the locals did not have their chance to speak. The imported speakers were treated to a meal in a private classroom, while other “imports” held their place in line. How was this fair?

Perhaps it’s no surprise that I watched the same scene unfold five years later on the sidewalk in front of the Supreme Court of the United States on the night of February 23, 2020. The Justices would hear the USFS v. Cowpasture River Preservation case, also known as the “Lorax” case, the next morning. I got there at 10:30 p.m. And there, another well-dressed lady with a clipboard was checking people in—placeholders for Dominion people and their allies. Just before dawn the next morning, the well-dressed, slick-haired Dominion people arrived to take their places in line, and this time money was exchanged for the placeholders. 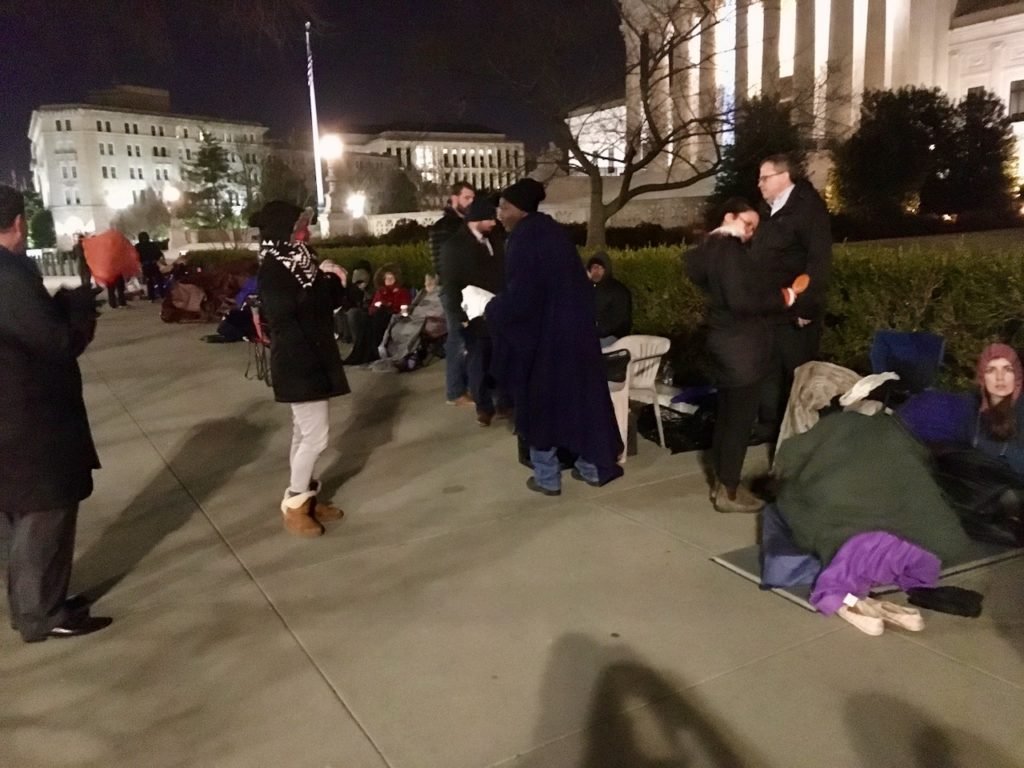 On the sidewalk in front of the Supreme Court building on the morning of February 24, 2020. The lady in the white pants holds a clipboard. She is escorting pro-pipeline people to the folks that line-sat for them all night. Money was exchanged. Photo credit R. Whitescarver.

We had been there all night, in the cold waiting for our opportunity to hear the case. I looked up at the towering Supreme Court building and saw the words, “Equal Justice Under the Law,” and thought, “how could this be? Is this really America?”

Another galvanizing moment for me was Dominion’s use of “quick-take” condemnation. I had never heard of this legal maneuver until the ACP. It’s a way to take possession of someone’s property in emergency situations before the court can award compensation to the landowner.

Reverend William Barber II speaking in Union Hill at a rally on the night of February 18, 2019. Former Vice President Al Gore is to his left and John Laury is to the left of Gore. Photo credit Andrew Shurtliff/The Daily Progress.

The most recent case of blatant environmental racism occurred in Union Hill, Virginia. This was, perhaps, the most galvanizing moment for me. Dominion planned to build a compressor station there, which would have caused 24-7 air pollution and noise in a predominately African American community. The historic community had been founded by many of the current residents’ ancestors, who were newly freed slaves. Dominion and the Virginia DEQ both denied, even in federal court, that Union Hill was a community of predominantly African American citizens. The data were clear as day, and yet Dominion denied it in court. The judges saw through Dominion’s tainted lens of urgency and ruled against the company.

And what about Governor Northam? The man with the black-face scandal in his past who is now trying to restore his credibility with the African American community. I have not forgotten that he disbanded the Governor’s Advisory Council on Environmental Justice or that he removed two Virginia Air Pollution Board members for noting the racial injustice of the compressor station in Union Hill. I have not forgotten that he has been absolutely silent about Union Hill.

During his gubernatorial campaign, then-candidate Ralph Northam informed the media that he sent a letter to DEQ requesting that Dominion perform a stream-by-stream assessment of stream crossings instead of relying on a U.S. Army Corps of Engineers (COE) Nationwide Permit. DEQ did not follow through on that. The ill-planned pipeline would have crossed over 1,400 streams in Virginia, 189 in Augusta County alone. I’m a farmer. I had to get an engineer to design a crossing for my cows to cross a stream on our farm. I also had to submit a joint permit application to the COE and the DEQ for my cows to cross the river. Did Dominion have to comply with the same regulations that a common farmer does? No! It received a blanket permit for all the stream crossings.

When Dominion began clear-cutting trees in the path of the pipeline in Virginia, the company was cited for violating the conditions of the permit. How could we trust Dominion to build the largest high-pressure pipeline in Virginia history when it could not even follow simple guidelines to fell a tree? 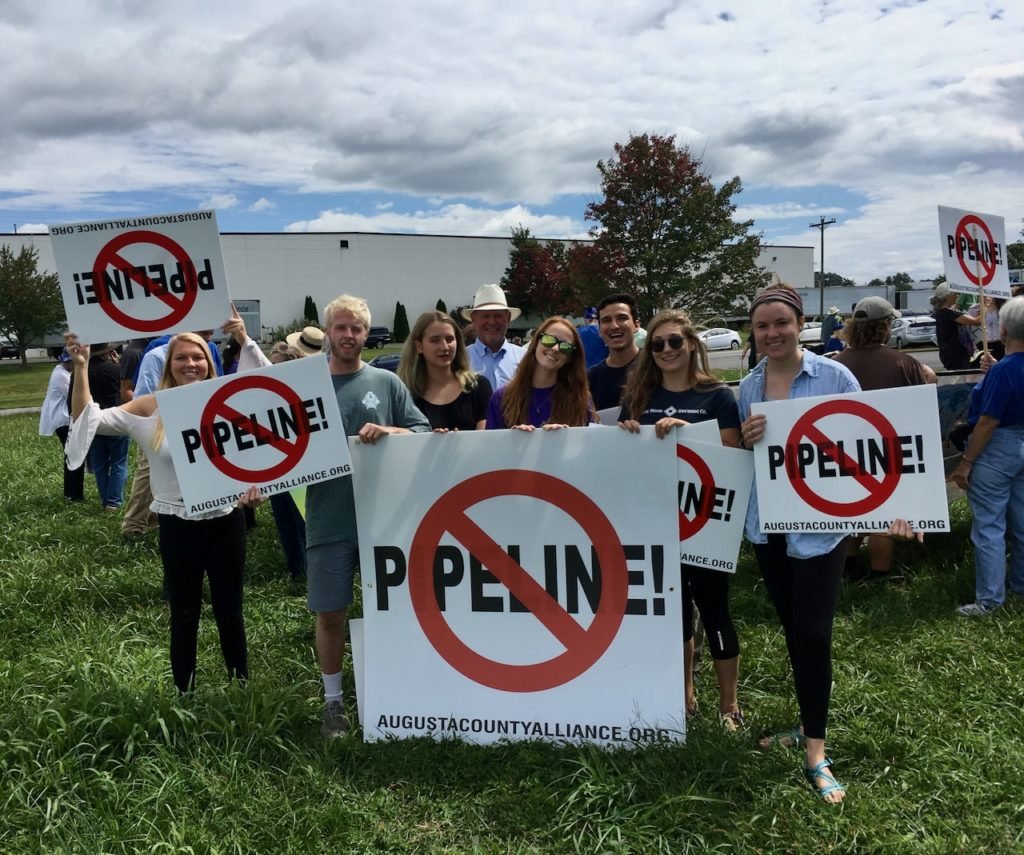 My James Madison University (JMU) students at an anti-pipeline rally on September 14, 2017, on the grounds of the DEQ headquarters in Harrisonburg, Virginia. Photo credit Jeanne Hoffman.

In the end, it wasn’t just about the pipeline. It was about Dominion taking advantage of the permitting system, the government, the people, and their property. I was fighting for the environment, racial justice, and, most important, common decency. And this time, the people and common decency won!

So Many to Thank

To the thousands of pipeline fighters, organizations, lawyers, landowners in the path, journalists, and politicians that helped us defeat this pipeline, I want to say thank you. Thank you for your long-lasting support of our water, our property rights, and common decency.

In Virginia, we need to help our fellow pipeline fighters to defeat the Mountain Valley Pipeline and then help Virginia meet the goals of the Clean Economy Act. Economies that depend on fossil fuels are not sustainable. Rise up and help us move forward with climate change, environmental justice, and respect for each other.

My First Article About the ACP Was Published Six Years Ago

It has been an emotional six-year journey to defeat this pipeline. I went back to the first article I wrote about it, which was distributed by The Bay Journal News Service on September 23, 2014. The article, “Unwise Pipeline Calls for People Power,” remains on target today.

Photo Gallery of the Fight Against Dominion’s ACP 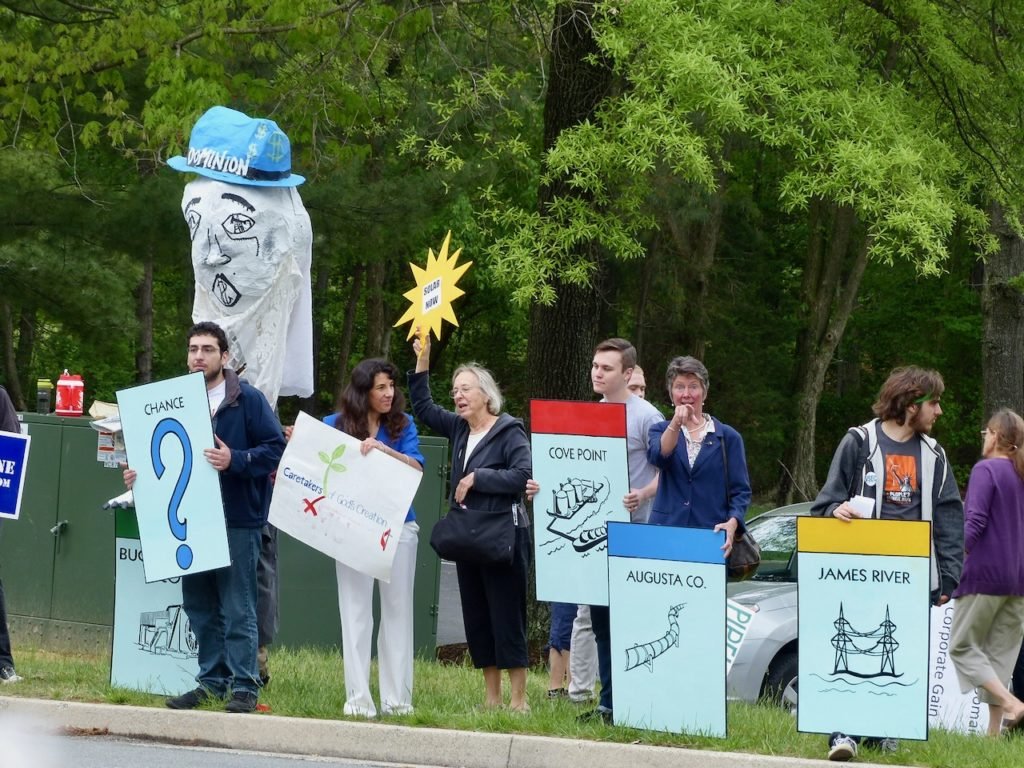 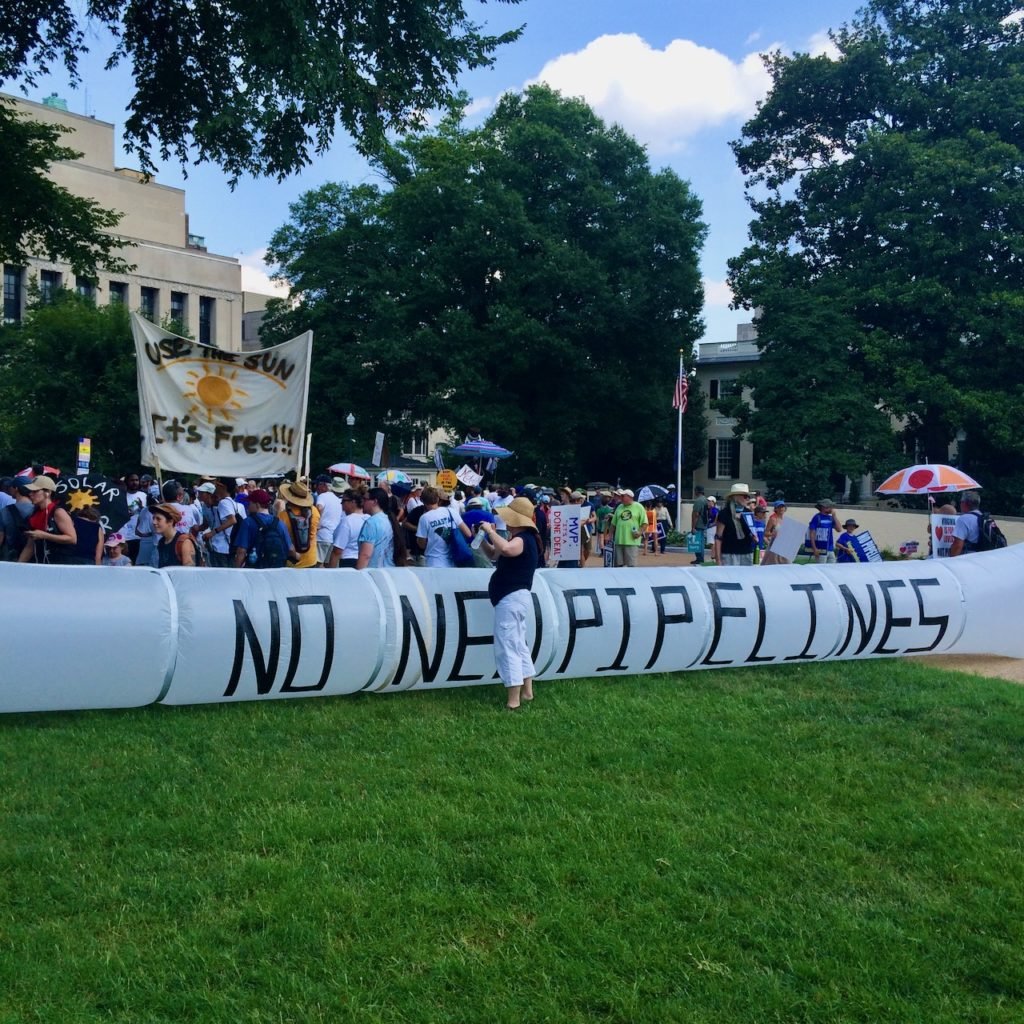 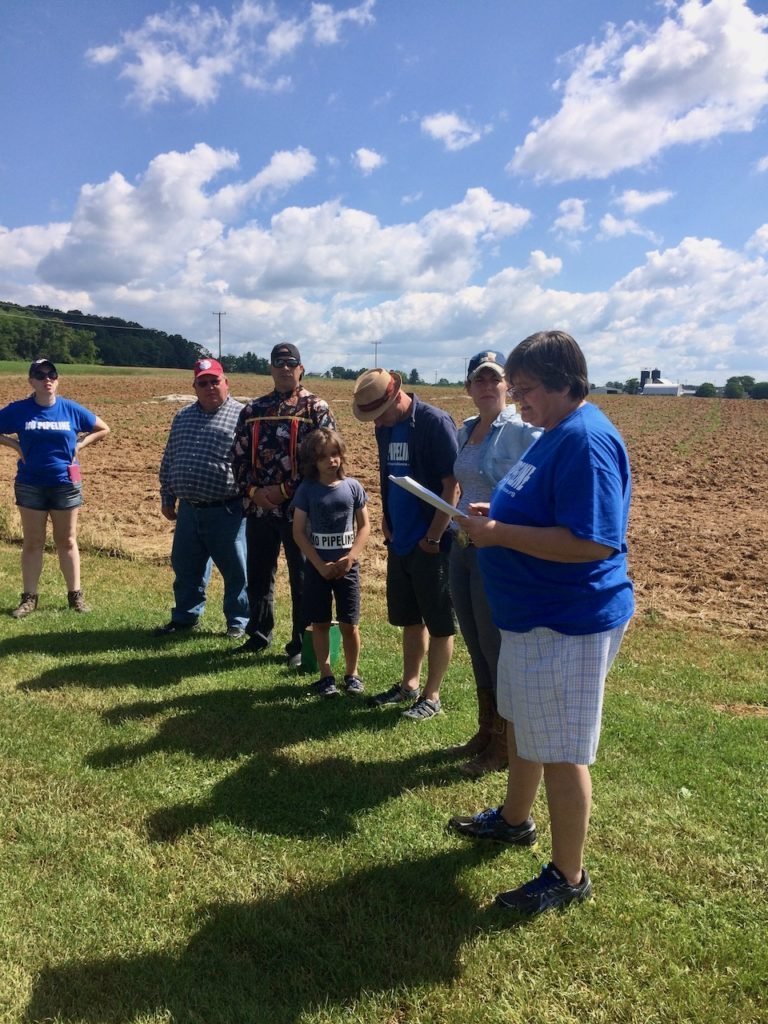 Pipeline fighters learn how to monitor the construction of the ACP during a training session in Staunton, Virginia. Photo credit R. Whitescarver. 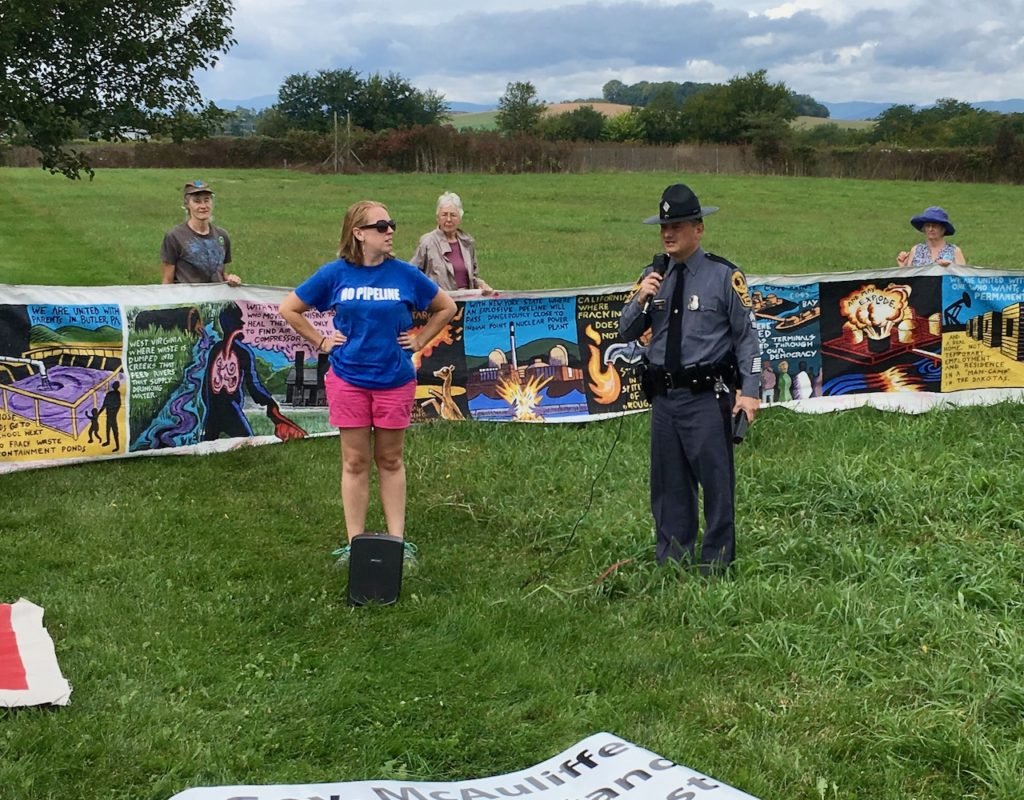 A Virginia State Police officer briefs pipeline demonstrators on our first amendment rights as Jennifer Lewis gets ready to speak at an anti-pipeline rally at the DEQ headquarters in Harrisonburg, Virginia, on September 14, 2017. Photo credit R. Whitescarver. 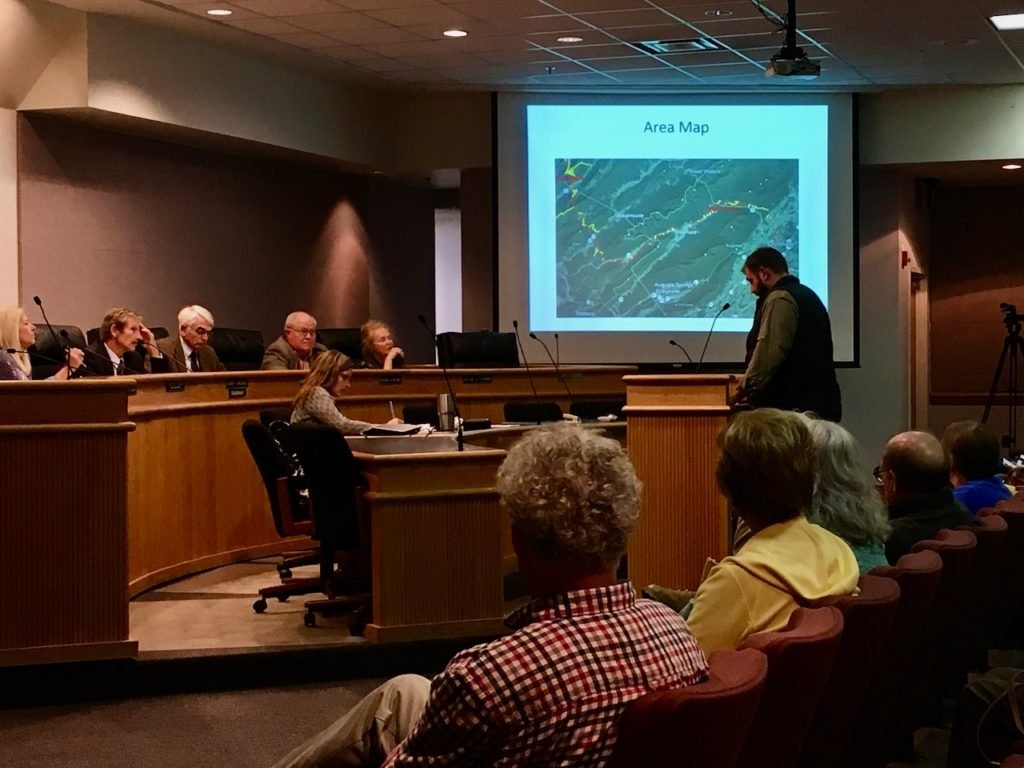 Augusta County Board of Zoning Appeals hearing on the Deerfield ACP pipe yard, October 4, 2018. The board voted against the pipe yard. One board member said, “It’s hard to support something nobody wants.” Photo credit R. Whitescarver. 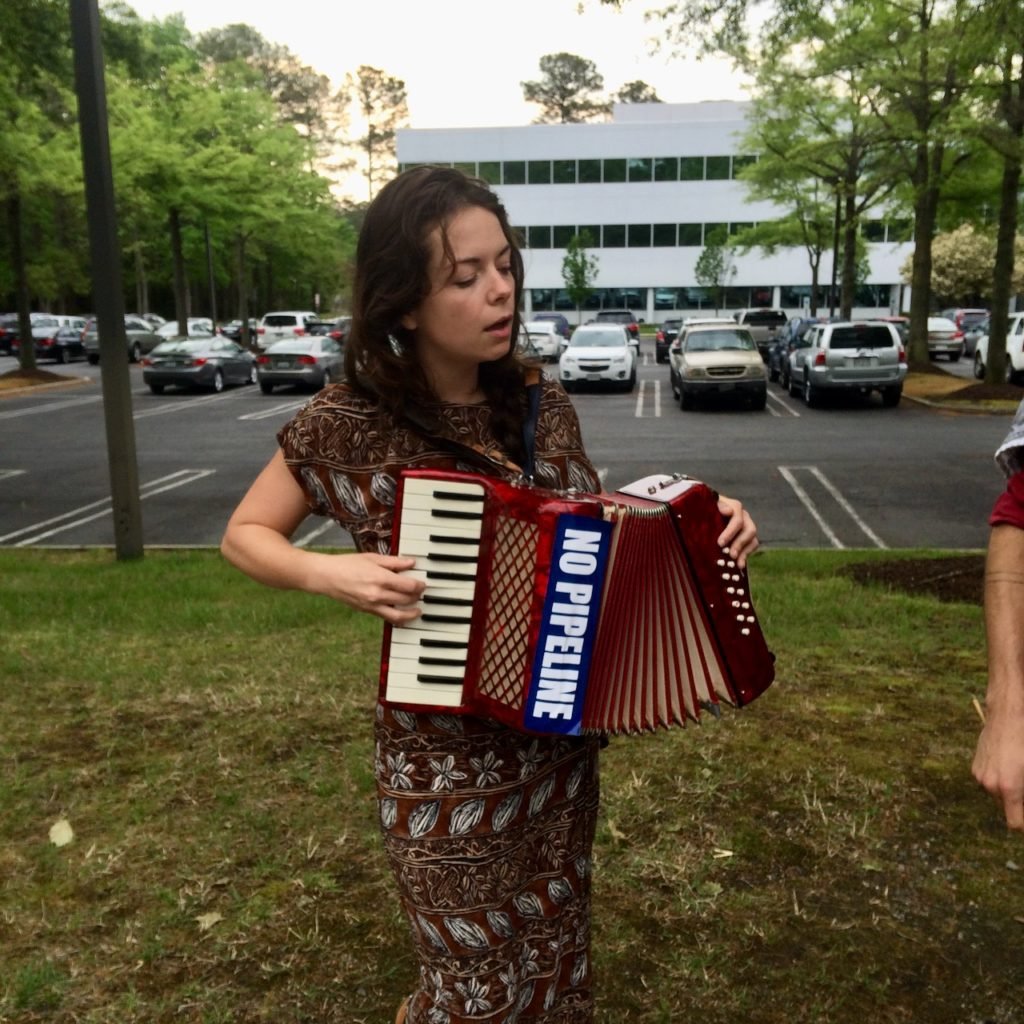 Laney Sullivan, musician and activist, at the anti-pipeline demonstration during the Dominion shareholders meeting in Richmond, Virginia, on May 6, 2015. I think she has been at every hearing and every protest. Photo credit R. Whitescarver. 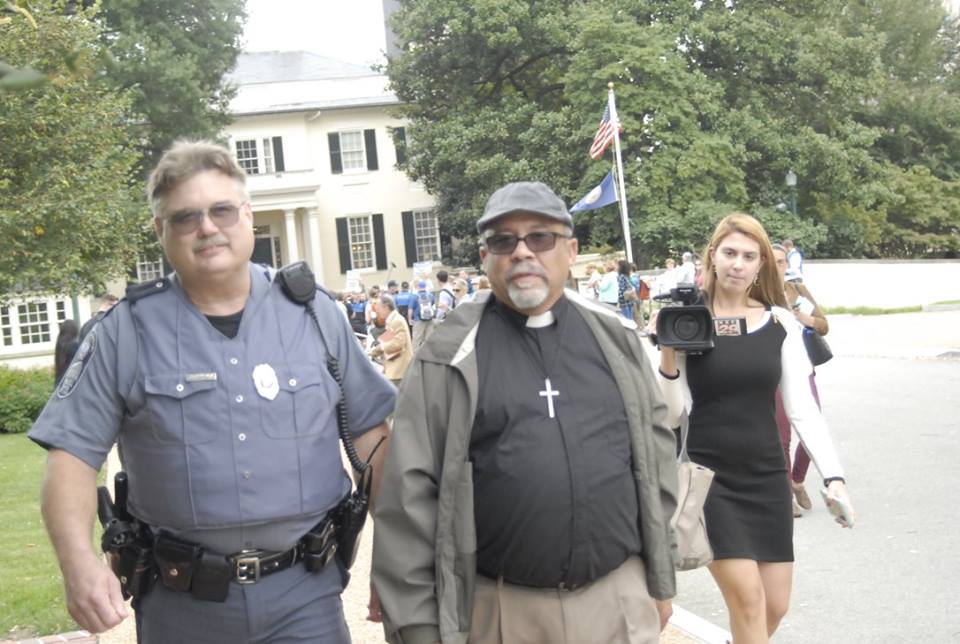 Pastor Paul Wilson was arrested at the Governor’s mansion for protesting against Dominion’s compressor station in Union Hill. Photo credit Friends of Buckingham. 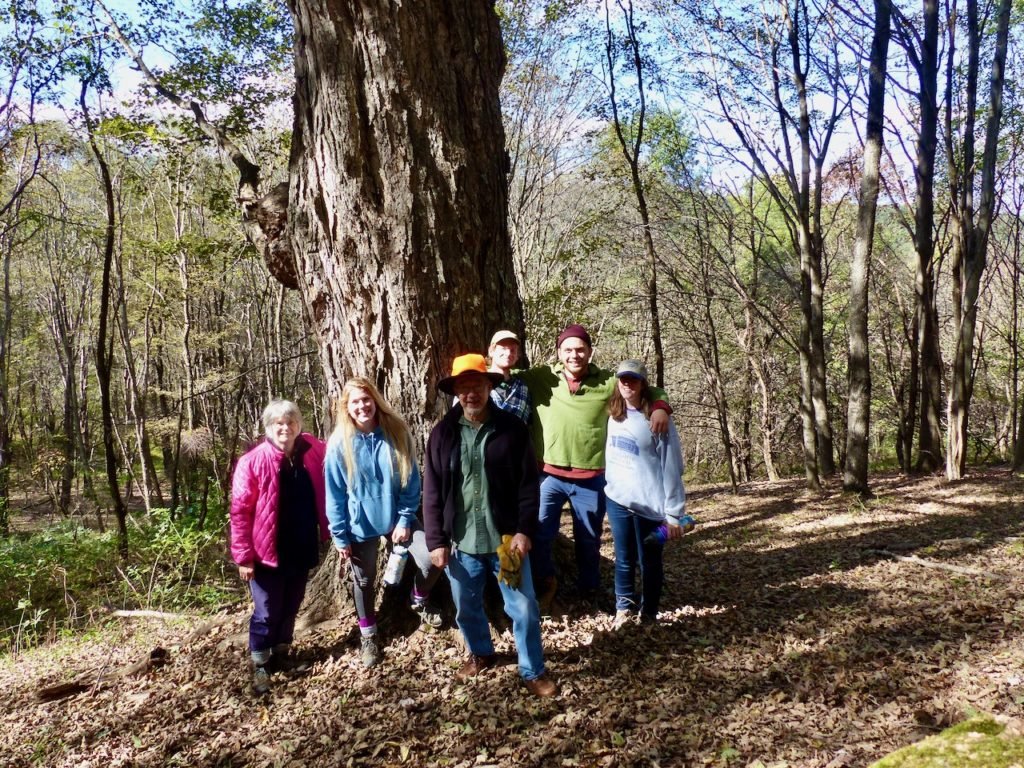 Lynn and Bill Limpert with my JMU students on their farm in Bath County. The planned route of the ACP would have cut down over 300 old-growth trees on their farm. Photo credit R. Whitescarver. 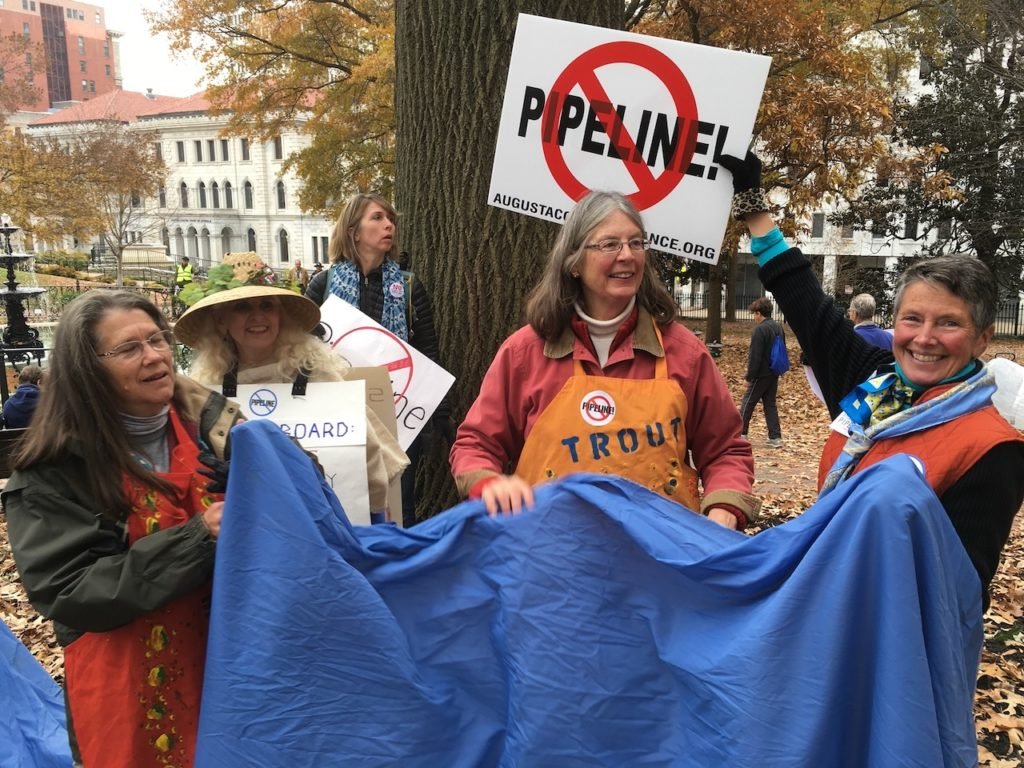 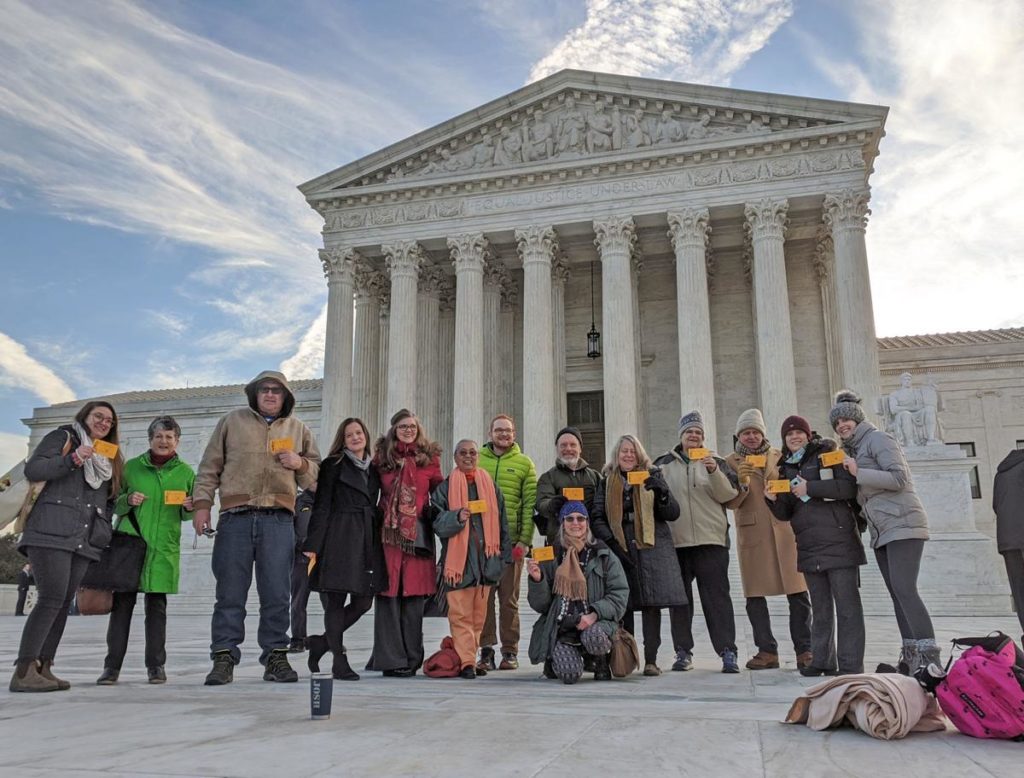 Fourteen of the lucky 50 with their golden tickets to get into the U.S. Supreme Court to hear the USFS v. Cowpasture River case on February 24, 2020. Maury Johnson is third from the left. I am third from the right, Nancy Sorrells is fourth from the right. Photo credit R. Whitescarver